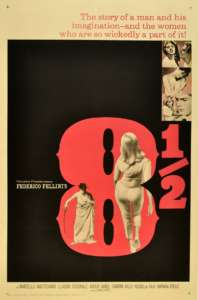 8 ½ is considered one of the greatest films in the cinema history. The movie inspires whole generations of directors (Pupi Avati decided to make films after having seen this masterpiece). Furthermore, 8 ½  was influenced by some works by Ingmar Bergman (Wild Strawberries) who also inspired Woody Allen’s cinematography. Nanni Moretti shot many movies along the lines of 8 ½, first of all Red Wood Pigeon which reflects the political and artistic crisis of an intellectual. Paolo Sorrentino tried making something similar with his movie The Great Beauty ( but he didn’t manage to reach a similar artistic expression), whereas Pedro Almodovar Pain and Glory is focused on the same cinematographic concept as 8 ½.

Guido Snaporaz is a director who suffers from stifled creativity, played by Marcello Mastroianni, once again Fellini’s alter ego, main character of this surrealist comedy drama co-scripted by Fellini, Flaiano, Pinelli and Rondi. Fellini shows his difficulties and he reveals his fear of dashing expectations to the public, the struggle of settling the score with the memories and ghosts of the past, and the blood and guts of living the present with all of them. Guido tries to balance between his middle-class wife (Anouk Aimeé) who he betrays but who he is not able to leave and his seductive mistress (Sandra Milo). The film tells Guido’s life through surreal and fantastic symbols. The director leads his character through a thermal station, but thanks to some oneiric images Guido goes back to his childhood house in Romagna, to his catholic boarding school that represses his sexuality and to his first meeting with a woman. 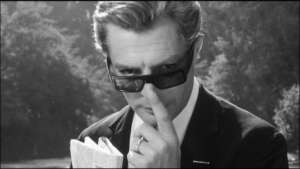 The movie is a sequence of flashbacks, never ending nightmares, megalomaniac dreams which include the women in his live, the lust of purity and escape. The fantastic scene cites Miracle in Milan and Zavattini’s idea of the man flying over the city. In the movie there are many citations and they all refer to Fellini’s cinematography. “What are you up to? Are you thinking of another movie without hope?” says the doctor of the thermal station. The character of an intellectual critic follows Fellini’s work, like an unpleasant talking cricket that criticises every new insight. “A film without a problematic idea is useless… those authors that don’t join the cause, what do they want to tell us?
The dreams about the past are the best moments of the movie, especially when Fellini remembers his parents and confesses “We talked very few to each other”. He would have had many questions to ask his father, who he never saw, but it is too late now, and no one can listen to him.  The protagonist’s dreams are characterised by his wife’s presence, that observes him from a distance, by a catholic childhood house where he spent his youth and by a languid soundtrack.
Grandma’s house, a bathtub, expressions in dialect, an old house with the fireplace lit are other poetic moments. The director meets Mario Pisu and Barbara Steele, a bizarre couple of lovers that could be father and daughter. The casting choice was as hard as geting rid of a crowd of annoying people, journalists, critics, fans and busybodies.
Clown Polidor, who plays himself and clarifies the director’s doubts, recalls the circus memory. The movie is full of disturbing questions about creative crisis: “You are not you anymore…” the director thinks. “And what if it were the end of a liar without talent? What if it weren’t a temporary crisis? May be it’s time to stop with these symbols”…he fears. 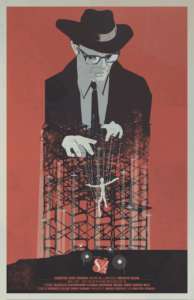 Fellini introduces the topic of religion and the endless inconsistency of those who received a catholic education, who are not able to find Faith, but at the same time would like to be flashed on the road to Damascus. He recalls the seminary he attended when he was a boy, the meeting with Saraghina, the friars made  his erotic intent to spy on the prostitute impossible.
The intellectual critic tells the hesitant director: “You lack authentic and profound culture. You cannot deceive us with small nostalgic memories. Your attempts to denounce this situation fail”.
Fellini uses the character of the intellectual to ridicule some left wing critics who wanted him to side more Marxist opinions.
The director confesses that his only desire was to tell the huge confusion that human beings have inside them. The movie is a sequence of contradictions and doubts, especially as the wife, aware of his betrayals, comes into play. Fellini is consciously drawn by the Church, because having … support is everything in life, perhaps it would be better to kiss the ring and look remorseful.
At one-point Guido decides he wants to shoot a film, where every kind of things happens, even a movie which begins with a spaceship on a launch pad. Enough of boring stories, where nothing happens!
Rossella Falk plays the character of Guido’s friend and she raises new doubts: “you’re making the same mistake, everyone makes: wanting people to be different from what they really are. You are free, but you have to be able to choose. You don’t have much time to live”. The director is living a crisis and confesses everything to her friend:” I thought I had clear ideas.  I wanted to produce an accurate film, useful for everyone in order to bury every dead part we have inside us. However, I am just confused. I have nothing to say, but I want say it anyway”. 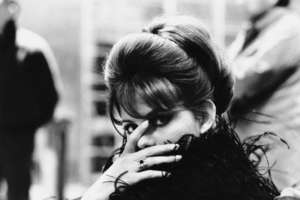 Some eternal truths together with the typical Fellini theme of the truth-and-lies dualism arise. He deals with the fact that lying is wrong, such as muddying the waters and not letting the audience understand what is true and what is not). The dream scene where all the women in his life gather in a big house is evocative. A real harem worthy of King Solomon, which includes even the whore he used to spy on as a child and a black woman, who always dances in his dreams.
The women belonging to the past are confined in the attic of old memories, upstairs. “Don’t trust him. He’s a two-faced man.” Say the ghosts. Telling the truth without hurting anyone and especially not being flooded with regret and sadness would mean real happiness for the director.
The intellectual persecutes Guido and the latter dreams about hanging him when he blames his characters for being fake and vague.
The director is aware he doesn’t have many friends anywhere, he would like to make this film as if it were a new creation, his truth, even though his wife makes him face the reality. “You want to teach others, but you are not able to”.

The tenderness of Claudia Cardinale’s character, symbol of purity and true beauty, comes into action at the end of the movie to raise new doubts. “Choose one single thing and , give up everything for one single thing. No, I can’t do that.” confesses the director.
Cardinale wearing white, walks through a surreal night landscape shaken by a blowing wind. She listens to the story she should interpret, she understands that the male character doesn’t care for anyone and he is not able to love.

The end is bitter: “What a cheat you are. There isn’t anybody anywhere. There’s no film.” The ending is a bagarre with all its characters on the screen, even if it is not a pochade. The film is not shot and surreal scenery is taken apart piece by piece.
The director is running out of ideas and he is understood by the intellectual: “We need to stay sharp till the very end. There are already many useless things in the world. Destroying is better than creating, if we don’t create necessary things. We are smothered by words and images. We need to train ourselves to  silence, to praise the empty page, because nothingness is true perfection”.
The critic reports quote after quote and he claims the right- duty to wipe out everything useless for himself. The movie ends with images of a science fiction film location, a launch base of a spaceship, which has cost a lot, and which makes the director very angry.
The director has run out of ideas, he doesn’t know what to say, he prefers giving up and letting the third-ring circus be taken apart.  Fellini leaves some circus music playing and this music represents his first works and it all ends with a fantastic catwalk of characters, all dancing on Nino Rota’s theme. 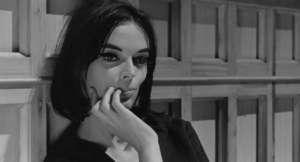 8 ½ is an autobiography full of dreams, the public should not expect anything rational, but only brilliant ideas which stop the director’s monologue. Fellini shoots his thoughts, his imagination, his ideas and his dreams which all try to mix up together.
In his amazing and poetic movie Fellini deals with the themes of Art, Memory and Death.

The great Nino Rota’s soundtrack goes down in the history of cinema and it is a mellow theme which echoes in the memory.
8 ½ is a masterpiece which won the Academy Awards for Best Foreign Language Film and Best Costume Design (black-and-white) to Piero Gherardi. The most absurd thing is the title: this remains for the number of films directed by Fellini, who made a debut with a movie in co-production. This title was supposed to be temporary but, in the end, it became the official title. This movie deals with the subject of cinema inside itself, as it tells the story of a director who forgot what he wanted to shoot. Mario Sesti in his documentary film L’ultima sequenza (2003) proposed an alternative ending shot inside a dining car.

Elena Cammarata and Giulia Pasinelli are students of the Linguistic Sciences and Foreign Letters faculty at the Catholic University of the Sacred Heart in Brescia, Italy; they collaborate with Inkroci in the translation project coordinated by Professor Jenovia Amisti Smith.