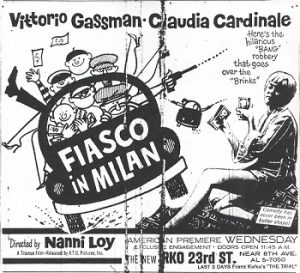 Nanni Loy (1925-1995) directed his solid debut feature ‘Fiasco in Milan’ (1959), a follow-up to ‘Big Deal On Madonna Street’ by Mario Monicelli (1958), after the two movies he made with Gianni Puccini, writer of ‘Bitter Rice’ (1949) and director of ‘The Attic’ (1963). Even though he knew that ‘Madonna Street’ was a comedy with its feet planted in neo-realism, Nanni Loy takes Monicelli’s characters and treats them not as sketches but as real human beings, even if their stories turn out to be less deep than in the original  film.

In the absence of Antonio De Curtis a.k.a ‘Totò’ and Marcello Mastroianni, Loy casts charismatic Nino Manfredi (‘Café Express’ also by Nanni Loy) in the role of motor wizard ‘Piede Amaro’ and turns the ‘sexy card’ with teen bombshell Vittoria ‘Vicki’ Ludovisi. Critics should not draw parallels  between the two movies because they are each too different and ambitious in their unique way. Fiasco in Milan is just a fresh and lively ‘crime comedy caper’ set in the streets of Rome and Milan and at Bologna train station, with a sumptuous jazz soundtrack by Pietro Umiliani scattered with tracks from Chet Baker and his trumpet.

As for the story: in Milan a crime boss (Garrone) reads in the paper of a failed heist at the Rome pawn shop ‘Monte di Pietà’ (featured in  the first movie) and gets in touch with ‘Er Pantera’ (Gassman) to create a new gang to rob the armoured van carrying the winnings of the football pools after the big soccer match in Milan. Despite the help of an inside man, thanks to whom the job is meticulously planned, everything goes awry. The gang gets rid of the loot, which is then recovered by the police. Loy himself appears, in a Hitchcock-style cameo, as a guy nearly run over by Piede Amaro’s car after the heist. The director serves the characters well, not interfering with them but taking Gassman’s character of Er Pantera to its inevitable consequences. Riccardo Garrone is the ‘Milan guy’ who sets up the heist, while a young Gastone Moschin is the librarian who educates the son of an illiterate Manfredi. Vicki Ludovisi is Floriana, the sexy crazy babe who performs some daring strip scenes, sunbathes almost naked on the patio (risking the scissors of the censor of the time) works in a nightclub and speaks with a lisp. Her role is central to the movie because she prepares the gang for their crime and teaches Gassman the Milan dialect and, predictably, winds up in bed with him. Ludovisi’s acting career sadly stopped six years later, but not before having worked with Steno, Mattòli and Simonelli. In the film, Renato Salvatori and Claudia Cardinale get engaged, with Tiberio Murgia’s Sicilian blessing , but she runs away when it dawns on her that she is living with thieves. Salvatori gives the usual romantic neo-realistic touch to the film in his small but fundamental role in the sub-plot of the ‘love story’ with Cardinale. Capanelli, overwhelmed by hunger, dies of overeating but the scene is not as dramatic as Monicelli would have made it, thanks to Loy’s lighter tone. Nonetheless, the meeting with Pisacane at the hospital is brief, funny but also intense. At one point, Garrone, with a smile, quotes ‘Totò’: “when it comes to girls, the book-keeper can’t keep his head”.

Age and Scarpelli create the new character of ‘Piede Amaro’ played by Nino Manfredi, and Loy makes the most of the actor’s comic talent. In the movie he is presented as a mechanic in an unhappy marriage who wants to get a divorce. In 1959 it was unusual, even in comedy, to deal with what was considered a transgressive topic (divorce was made legal in Italy in 1970) and the character of the Catholic mother-in-law who prefers her son-in law to her own sinful daughter whom she disowns, is unusual. Their child is fought over and shunted back and forth like in a modern American movie.

The setting of Fiasco in Milan works well and Roberto Gerardi’s black and white photography evokes an Italy that no longer exists: the ‘economic boom’ of the late fifties, with Milan’s grand Central Station, the underbelly of the city of Rome and the first train loads of football supporters travelling to away matches. There are also some nice noir touches in the car that changes from black to white and changes its number plate. Er Pantera delivers an unforgettable line in thick Roman dialect at the end at the end of the movie, roughly translatable as “They’ve gone and aloned me, those four fuckers!”

Italian cinema critics like Pino Farinotti and Morando Morandini are not enthusiastic about the movie (which was a blockbuster when it came out) “Dull but not boring”, “The usual story about poor guys forced to steal” or “Fun but not like Madonna Street” – but nevertheless a movie to watch again to study the poetic cinematography of interesting Italian director Nanni Loy.