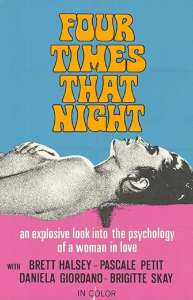 This is an unusual Mario Bava’s movie (Sanremo, 1914- Rome, 1980) , one of our biggest horror and imaginary author, that is specialized in gothic and thriller movies. A so far unusual production that I never seen, inasmuch I truted in some superficial and not-wise reviewers which defines it like a lower product, a Bava’s C-class work, a losebale movie soon forgotten.
Bava himself convinced me that it wasn’t worthy watch this movie, because he mentioned it among the movies he hated, like Dr. Goldfoot and the Girl Bombs (actually really funny) and Cinque bambole per una luna d’agosto [Five Dolls for an August Moon](I share that opinion).

Four times that night was made in 1968. Unfortunately, it was too ahead of its time – because of problems with censorship due to too hot scenes -, the movie was released just in 1972. This movie is considered one of Bava’s latest works, preceding Lisa e il diavolo [Lisa and the Devil] and Cani arrabbiati [Rabid Dogs]; the truth is that it was filmed just after Diabolik. Bava’s style emerges violently in details like, intensity of photography (based on vivid colors), which recalls horror comics, or zoom exaggeration or, again, last but not least, a remarkable narrative tension.
Since first sequences, even from cartoonish vision theme where an odd psychoanalyst’s stains fly as butterflies, it’s impossible not attribute this movie to the notable ligurian director.
We understand that the plot is just an excuse to investigate human’s psyche and different shades of truth. It goes without saying that this movie is the ideal container to show Daniela Giordano’s beauty, too much naked for times as sexy in several high rate erotic sequences.

Tina (Giordano) and Gianni (Hasley) they bump into a park on the outskirts of Rome, they date, they spend their evening together in a dance club and finally, they move to Gianni’s house. Here, they meet two Gianni’s homosexual friends, Duccio (Randall) and Esmeralda (Petit). The end of the evening is recount in three different ways.
Tina’s report to her mother makes her appear as a God-fearing woman and the man looks like a monster who torn her clothes and tried to rape her. Gianni, brag to his friends to have met Tina, a lustful woman who wanted to make love all night long, and who literally exausting him. Voyeur janitor tells the story of homosexuals who would rather be together instead endure  a woman companionship.
Lastly the shrink – the common thread of events and omniscient narrator, who tells the story as a classic love story, a meeting between a man and a woman which is premonitory of new developments. An almost romantic ending.  But it’s not sure that truth would be that one shrink  himself told, since he’s the first to doubt about it.

Open-ended ain’t disappoint audience, actually the best way to end for this kind of movie. As a mere curiosity, we must say that during the pause between first and second act, screen showed the title: Four times that night. Maybe the work-in-progress title just wanted to recall the four different truths. Mario Bava shows all his own competence as photographer, introducing a series of whirl fades-out (which were already appreciated in Diabolik), many nterlocking flashback, a deep underlying psychedelic tone and a deep narrative tension, like a thriller movie.

The movie would like to be a very European sophisticated comedy, as German co-production imposes, enriched by a grotesque tone that allows to accept scenes of violence and a lot of eroticism. Bava shoots naked bodies on the foreground but he omits the most intimate parts. He is the first one to exploit some topoi: the voyeur, the spied relation, the shower, the uninhibited woman etc. Giordano’s nakedness are limited and they concerns only her breast, nevertheless the erotic tension is outstanding. Perfectly interlocking screenplay with its own romantic ending that sees the couple head for the sunrise on Ostia beach. Doesn’t matter know the truth….