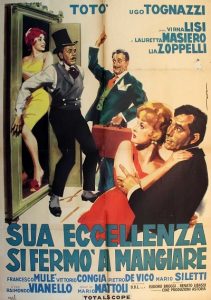 His Excellency Stopped Here for Lunch (1961) directed by Mario Mattòli is a sex comedy starring Totò, Ugo Tognazzi, Raimondo Vianello, Francesco Mulè, Virna Lisi, Lauretta Masiero and Lia Zoppelli. This was the last film directed by Mattòli with Totò in the lead role, marking the end of a mutually advantageous partnership. Totò plays the part of a thief who sneaks into an apartment and plays to his own advantage the lies that Tognazzi tells his wife (played by Virna Lisi) to hide an affair with another woman. A pure comedy of errors set during the Fascist period with Totò disguising himself as a doctor and being mistaken for Mussolini’s private physician. In the end, after many ups and downs, the thief disguised as doctor Tanzanella and pretending to call the “Duce” on the phone, finally manages to appropriate a set of gold Cellini cutlery. The theft of the set of cutlery brings out the driving ambition of all the characters; they all wish to further their own positions thanks to the minister’s and the doctor’s acquaintance with Mussolini. His Excellency Stopped Here for Lunch would be remade, for political reasons, in 1967 with the title Doctor Tanzanella, Private Doctor of…the founder of the Empire. The most enlightened critics remember this film as the forerunner of many clichés of the Italian-style comedy and the sexy comedy: couple swapping, misunderstandings, double entendre, people in the wrong bedrooms, wemen hidden in wardrobes. The fact that the film is set in the 30s helps it to make a thinly veiled criticism of the Regime, a satire on the grey politicians who support Mussolini.

Filmed in Umbria, in the Montefalco countryside, the action takes place in the fictitious Castelletto, the country residence of a countess who is awaiting the visit of a Fascist Party leader. The minister’s memorial speech is unforgettable- featuring an extraordinary Raimondo Vianello-as he praises a sports champion he knows nothing about, improvising a comic oration helped by prompts from Ugo Tognazzi The comic rapport between Totò and Mulè is perfect¸ Totò as an astute petty thief who manages to get away with his crime and Mulè as a bumbling police officer. There is mild erotic tension between Tognazzi and Lisi as an unsatisfied couple who, after the husband’s liaison with another woman, come to realise the importance of eroticism in their marriage. Lauretta Masiero is Tognazzi’s lover; she is introduced as the thief’s wife but, in the past, she had had a brief encounter with the minister, which embarrassingly for him, came to nothing. In this scene too, eroticism abounds, both when Masiero is hidden in the bedroom and when she evokes the details of the unfinished sexual encounter. Totò launches into double-entendres about “finocchi”* (“There are many in town”) and the audience understands that he is not talking about vegetables. His comments about a girl’s voluptuous figure ran the risk of being cut by the censor. His Excellency stopped here for lunch is a good farce (pochade) filmed by a skilled comedy director; it is modern and spicy and even a bit too risqué for 1961. At the time, eroticism was gaining popularity in Italian cinema.
The critics: Paolo Mereghetti (one and a half stars): “Totò’s last film directed by Mattòli can be filed under the genre that farsically evokes the Fascist period. Totò, in the role of an inveterate thief makes the only decent contribution.” Morando Morandini (two stars according to the critics, three from the public): “An inoffensive comedy whose title was changed to Doctor Tanzanella, Private doctor of the Founder of the Empire because of political pressures from above. Totò’s last film directed by Mattòli and not his best not least because he must make way to the pushy Tognazzi-Vianello duo.
I don’t agree with these critics. I side with the audience and Pino Farinotti who give the film three stars. Tognazzi and Vianello fit in well with Totò’s vis comica and create some classic moments such as the memorial speech for the sports champion. Totò is exuberant and uncontainable as ever, this time working with a fine story and screenplay written by Gianviti and Metz. Excellent background music is provided by Gianni Terrio based on Creola- Straziami ma di baci saziami.

*In Italian ‘finocchi’ means fennel, but this word is also used to refer to homosexual men.