Home Reviews Cain's Movie Collection I am mine 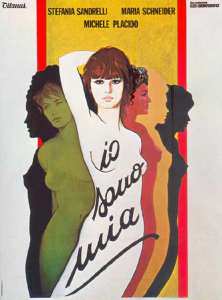 Sofia Scandurra (Rome, 1937-2014) is a writer, screenwriter and documentary maker. This is her only feature film, which is based on a feminist novel by Dacia Maraini.
These types of  ideological films were  popular in the 70s, they were meant to didactic projects, somewhat bespoke from a technical point of view and even pleasant to look at for the presence both of a great cast and of a suggestive setting.
Scandurra, Maraini and Lù wrote a feminist story which is was made and played mainly by females, with few men acting and none of them- with the exception of the young boy- make a good impression.
The feature- film was an Italian-Spanish coproduction and won the Madrid Award: well performed by Stefania Sandrelli (fascinating and sexy) and Michele Placido (still handsome and wretched). At the same time, it is not to be underestimated Maria Schneider, Francisco Rabal, Anna Henkel and Grisha Huber’s contribution.
The story illustrates Vannina’s (Stefania Sandrelli) sexual emancipation, a woman submitted by her rough and chauvinist husband Giacinto ( Michele Placido). Vannina first cheats on him with a young boy (Walter Ricciardi) and then she devotes herself to the feminist cause and to the homosexual love with Suna (Maria Schneider).
Through personal drama, engaging eroticism and amazing shots in on a Mediterranean island, Vanina will be free and she will carry on her condition of emancipated woman by herself.
The movie shines thanks to Stefania Sandrelli’s cheerful beauty. She enlightens the screen with her presence; moreover, she plays some daring erotic scenes. Michele Placido’s character is truly conventional: a husband as they existed some time ago, however incapable of understanding his wife’s needs. Maria Schneider is a woman anguished by her doubts, by the terrible relation with her father and by a disease which will make her an invalid.
The film’s limit is its intention to become a ‘film-manifesto’, written and made by women in all its features: from the editing, to the photography and even its soundtrack was written by the feminist composer Giovanna Marini.
The original  idea of creating an all-female project would not succeeded.  Sofia Scandurra was shocked by the movie’s lack of success, despite the presence of some interesting moments pointed out by virtue of insular photography and by the spontaneous female portraits.
The little-town- women’s rebellion against a series of feminist speeches still considered unacceptable represents a sign of those times. A movie written in order to contribute to women’s emancipation, a fight which was, at that time, torn apart by some male critics  as part of a “war” between sexes that for a period has had characterized Italian social life.
Maraini and Scandurra could have undoubtedly done a better job, nevertheless, they succeeded in rubbing their noses in the unstable relation between men and women. I recommend to  see it again!