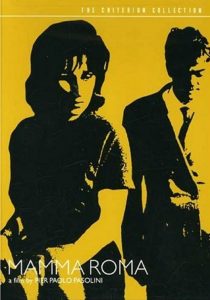 Accattone and Mamma Roma’s genre cannot be clearly defined: these are literary works, from which the entire director’s poetry flows. If I could give a personal definition, without sounding blasphemous, I would speak of neorealism aided by a hint of Pascoli and De Amicis melodrama, two authors very dear to Pasolini.

Some interesting facts
Novice Ettore Garofalo was discovered by Pasolini while working as a waiter in a tavern, and in some sequences of the film we see him at work in his real job, when he is hired to serve at the tables of a restaurant. The writer Paolo Volponi, one of Pasolini’s friend, plays the priest to whom Mamma Roma asks for help to find a job for his son. The exteriors in the film were shot on the outskirts of Rome, at the Palazzo dei Ferrovieri in Casal Bertone, the village of INA, Casa Quadraro, Parco degli Acquedotti and Tor Marancia. Other scenes were shot in Frascati, Guidonia and Subiaco. We often notice in the background the Basilica of St. John Bosco’s dome, as well as the shanty towns where poor people actually live. With a little trick, Pasolini manages to combine scripted and spontaneous dialogue. Anna Magnani in fact rarely acts live with an amateur actor in a scene: the dialogue is cleverly edited using close-ups.

Reviews
Paolo Mereghetti (three and a half stars): “The theme of a proletarian unconsciousness – or of a different consciousness – is at the centre of Pasolini’s second movie, where the director ennobles his characters with references to Renaissance painting (Dead Christ by Mantegna) , and reaches the top of pathos without shedding a tear: Mamma Roma represents a sore but indestructible femininity, while Ettore, skeptical and prematurely disappointed by life, is Accattone’s ideal brother, without being a dull replica of him. Magnani delivers one of her best performances despite the fact that Pasolini and her didn’t see eye to eye (he accused her of wanting to give the character petty-bourgeois traits).
Morando Morandini (three and a half stars from the critic, three stars from the audience): “The experiment of merging the acting of Anna Magnani with the Ragazzi di vita-Hustlers is partially successful, but despite imbalances, excesses and dumb zones, the film has moments of engaging stylistic power”.
Three stars from Pino Farinotti, who doesn’t explain his reasons.
Our opinion, as Pasolinians, is that the film deserves four stars: we cannot find flaws in an effective film, which combines psychological drama with scenes of everyday life, spontaneous recitation and a technical approach, a screenplay free of defects and a realistic dialogue.