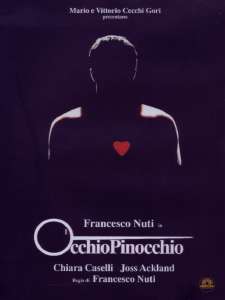 Women in Skirts (1991) was a controversial but successful movie. It was the last great box office success by Nuti, even though it aroused some controversy among feminists and snob critics. OcchioPinocchio is a great movie, it cost more than 20 billion and gained a little more than 1/5 of that. The shooting started in July 1993, but was interrupted between November and Spring of the following year. More than 20 weeks of work directed by a Nuti who was already showing some signs of his interior crisis. We are dealing with an ambitious movie filmed mainly on location in the US, where many of the actors are from, in particular, Texas (Euston, Amarillo, Mississippi); but also in Rome, Brescia (Villa Mazzotti in Chiari), Trentino Alto Adige, Calabria, Piombino (the interior of the steel works) and in the Province of Cosenza.

The Fellinian interiors, reconstructed in Cinecittà, are astonishing and they give us the feeling of being in Toyland. Nuti shoots the best movie of his entire life, a sort of compulsion from within: something tremendously personal. He succeeded in creating a pure auteur film even though few people appreciated his creation. On seeing this movie again, I wonder how a renowned critic, such as Paolo Mereghetti, can define it as monstrous, unfinished, inconclusive and even badly filmed. OcchioPinocchio is, without doubt, a masterpiece of cinematographic technique. Nuti doesn’t appear during the first 20 minutes, but his mark is fully visible. Typical of the American cinema, are the rapid and essential fadeouts, dollies and extraordinary long shots and the time flies by.

Nuti, in 20 exciting and amazing minutes, is able to describe the monstrosity of Brando Della Valle’s financial empire. He is Pinocchio’s unknowing father – an unscrupulous Geppetto, a businessman whose power extends even over the police. The movie begins with Brando’s brother’s death. During the reading of the testament, the characters discover the existence of a son who’s being hidden in a hospice in the mountains: a naive boy raised by elderly people who everyone calls Pinocchio. His father decides to bring his son back home and integrate him into his world. Brando changes Pinocchio’s name to Leonardo, a name the boy refuses in the same way he despises a money-based reality he cannot understand.

Pinocchio runs away and meets Lucy (Caselli), the female version of Lucignolo. She appears as a black heroin who reminds us of one of Tarantino’s characters. She is a convicted felon who’s wanted for a murder she didn’t commit. On a skyscraper roof, Pinocchio, just before the meeting with Lucy, squashes a cricket – a quotation from Collodi’s original Pinocchio. It’s on the top of this place where he wishes he could catch a helicopter to go back to his world.

After having spent his life caring for old ladies who he then had to bury in the cemetery he had built in the hospice garden, Pinocchio falls in love with the very first real woman in his life. In a very moving scene, his comment about it will be: “That’s not fair. You become fond of them and they die. At least warn me beforehand!” From this moment on, the movie becomes an on the road along the roads of Texas with the two lovers stealing cars, bikes and clothes in an attempt to reach the border.

The sequences in Toyland, a sort of surreal Las Vegas, where people dance and sing are brief, not what Nuti intended, which was about 30 minutes, but due to production reasons. Lucy, in a whale/shed (an idea by Luciano Ricceri), initiates Pinocchio to the joys of sex. Too bad that she is murdered a few minutes later by the police on the trail of the evil capitalist Geppetto.

“Pinocchio no longer exists!” The main character will scream, in a crescendo of madness, just after the accident. His sorrow leads him to his death, but he resuscitates in order to continue the love affair – perhaps he had only dreamt it – he has started with his beloved Lucy.

In a fairy tale finale, Pinocchio gets to Mexico where he meets a girl – we cannot see – who repeats, in Spanish, the exact words Lucy had once said to him about lending her his jacket. “I’ll give it to you, but let’s be more careful this time” is Pinocchio’s answer. The new couple walk hand in hand in a fairy tale setting along Pinocchio’s wooden nose.

OcchioPinocchio is a social grotesque and fantastic comedy. It begins as a fairy tale but is turned completely upside down by the end of the movie. There’s only one naive and innocent character and that is Pinocchio – a lamb among wolves – a Peter Pan who, contrary to Collodi’s puppet, doesn’t want to grow up. The protagonist doesn’t comprehend the world outside the Hospice, the reassuring place where he lives with the many elderly people he takes care of. He especially cannot understand the capitalist world. “As far as I’m concerned little has changed, the elderly remain elderly. Of course, you wash and care for yourselves, but what has that to do with me? Take care during the change of seasons because that is when the elderly die”. He starts building a cemetery in the garden of his father’s villa, waiting for the old rich people to abandon their useless lives.

The movie changes its rhythm when Nuti himself makes an entrance: monologues and long silences are alternated. We can still see Pinocchio’s nose, but this shadow is the only thing that links it to the tale. When Lucy appears, everything becomes chaotic again. Some chases and accident sequences are really American style with a touch of the best Italian police movies. Giovanni Nuti produces an astonishing and, at the same time, simple country soundtrack even if silence is sometimes preferred by the Director – with many quotations from Ry Cooder and guitar strings that highlight the settings, actions and dialogues. Dollies, pan shots, close-ups, field and reverse shots, creepy subjects, hand-held movie cameras used thriftily and poetic longshots are the instruments the Director uses with first class technique. Nuti’s shots of Chiara Caselli are extremely good – the actress joins Francesco’s cast after having worked with Antonioni and Cavani. She acts marvelously without embarrassment, even in the chaste nude scenes that are realized with candor and decency. They don’t bother anyone (except Mereghetti).

Francesco Nuti rewards us with an interpretation similar to Forrest Gump (Pinocchio style), with a character who represents the evolution of his naïve boy who doesn’t understand the world around him, to one who develops a theme close to his heart, that of abandonment.

Several monologues are as always, surreal and odd – less than usual though –  but rich in peculiar expressions typical of a confused character, out of this world, blundering through life, but full of love to give.

The monologues, especially the ones about the attachment Pinocchio felt towards the old people at the hospice and being outside the border, are not the only things worth recalling. Some other scenes have great impact as well, such as the sequences with the sling and the marbles; or when he drives a car or, again, the hesitant and rambling sexual intercourse with Lucy. A boy who has never grown up becomes the main character in this ironical gothic movie that treats high finance as though it was a dark tale. Pinocchio, in this film, is an outcast, abandoned and different from the others because he cannot empathise with the world around him.

OcchioPinocchio is Nuti’s most personal movie as John Lui (1985) is for Celentano. This is a picaresque comedy with quotations from The Blues Brothers (1980) by John Landis and also from Corrado Farina’s (1971) Hanno cambiato faccia (The Capitalist Vampires). Nevertheless, this doesn’t change the fact that the movie cost far more than the amount it gained. Moreover, it wasn’t understood by Nuti’s fans, who would have liked the usual comic and thoughtless movie instead of this intense and poetic auteur masterpiece.

The public wasn’t the only one shocked: it did not meet with the favour of the critics and received very harsh reviews. OcchioPinocchio marks the beginning of Nuti’s downward parabola. However, his history of moods alternating between deep depression and exceedingly high spirits, ever in conflict with himself, may have given origin to his inspiration. In this self-destructive moment of his life, Nuti creates a story about abandonment. Maurizio Calvesi’s photography exquisitely immortalizes the amazing North American landscape, which creates such a strong contrast to Pinocchio’s naivety.

This is the precious work of a craftsman. The movie was filmed entirely in Cinemascope using the best Panavision cameras, but ends up destroying its Director both morally and financially. Due to legal issues, Nuti loses 3 billion, but he renounces his salary in order to finish the movie of his life. According to him, though, the film has to be considered as unfinished because there is at least one more hour nobody has seen: it seems like Cecchi Gori forbade it to be added. Legal issues also for Francesco Nuti and Chiara Caselli: the Director had bragged about seducing his actresses, a declaration the leading lady didn’t appreciate.

A movie that is a revisited tale: a peculiar rewriting of the plot where Pinocchio is anything but a liar. On the contrary, he is an outcast, an abandoned child, someone different, much better and more naïve than any of the other characters who appear in his life. These are also some of the undeniable merits of a movie which is, at the same time, a merciless critique of the financial world. It’s no coincidence that this world is American because, quoting Nuti: Nowadays the real power, the one based on dirty money, is American. The only fault here is the decreasing level of rhythm in the second half of the movie. Nevertheless, it remains a little masterpiece; the movie that will symbolize all the poetry of Francesco Nuti’s work throughout time. Watch it again, but after having torn up Mereghetti’s review.