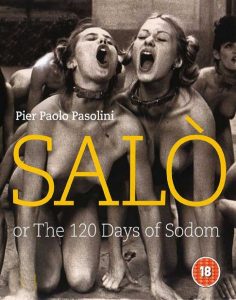 Salò or the 120 Days of Sodom is the most debatable and complex film by Pasolini. It is posthumous, but complete. Released in 1975, after writing Abiura alla Trilogia della vita (Abjuration of life’s trilogy) and a highly critical speech against authority, refusing the past as “lots of meaningless and ironic ruins”. In his abjuration Pasolini didn’t deny the light and merry eroticism in Decameron, in A Thousand and One Nights (Arabian Nights) and in The Canterbury Tales, but he thought that these kinds of works were a thing of the past.