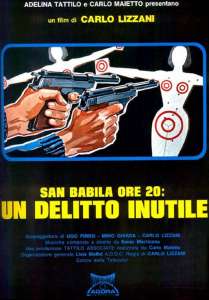 Carlo Lizzani (1922-2013) is a director whose political ideas have never been a secret and, at the same time, he has always produced documentary styled movies with great attention for historical details. Some examples are the intense Mussolini ultimo atto (Last Days of Mussolini, 1974); Banditi a Milano (Bandits in Milan, also known as The Violent Four, 1968) or Fontamara (1980) and La vita agra (It’s a Hard Life, 1964), both inspired by literary works.
These are just few examples from his productions as a director and screenwriter. His works have usually been focused on fulfilling a project based on existing theories. This doesn’t help spontaneity but it gives his work credibility which is very precious from a historical point of view. San Babila 8pm: a useless crime (endless title which was a trend in that period) is more relevant as a recollection of a certain historical period, showing the clashes between young men belonging to the extreme left and right rather than being mere fiction, being too old-fashioned and too connected to the 70s culture.

The movie is based on a true story that happened in 1975 in San Babila Square, the young Fascists’ den; those recognizable from their sunglasses and their leather jackets in contrast with the Eskimo coats and Clark shoes of the young men from the Left. The film was made by Lizzani with Pirro and Garda’s help and the collaboration of Claudio Lazzaro as far as the historical documentation is concerned.
Alberto Brasili’s murder, killed by a group of fascists, is the event on which the movie is focused. Due to the lack of famous actors in the cast, the facts assume much more importance compared to the interpretations. Lizzani is looking for reality as an end in itself by presenting a naked-truth crime news. He does that in a somewhat neo-realistic way taking inspiration by Zavattini: the movie follows a typical day in the life of a neo-fascist group from Milan.
One of the most famous actors, among the many unknowns selected through several auditions, is Pietro Brambilla (Ugo Tognazzi’s nephew) who played, in the same years, in La casa dalle finestre che ridono (The House with Laughing Windows, 1976) e Bordella (House of Pleasure for Women, 1976), both by Pupi Avati.

This film is often broadcast on Tv, even on Sky, but almost never in its full-length. For instance, the scene where fascists are goose-stepping is missing in the same way as some violent scenes such as somebody’s beating to death in front of a defenseless priest.
The strikes and the political demonstrations are the scenes in which the neorealism is significant because everything is not faked but rather pulled out from reality with the actors joining the parades and the rallies. Lizzani shoots many scenes from inside a van capturing realistic sequences of clashes among different factions and the efforts of the forces to scatter the rioters.

San Babila is not a complete movie from the cinematographic point of view: there is hardly any plot and the screenplay seems improvised, based on the stunts of the young men belonging to the Left party and on the generational fights, leading up to a horrible ending in which the massacre is displayed. The movie remains a valuable historical document of the period more than any other books or journal articles, because Lizzani -a Democratic- succeeds in getting into young fascists’ mentality and in filming each one of their deleterious actions. Despite of his political beliefs, the director is impersonal and he doesn’t judge, instead, he makes the spectators see his own point of view as they are shocked by the amount of gratuitous stupidity and violence.
From the critics with a straight opinion, to those who expect a movie to have a political, a well-defined position and an extreme realism; everyone loved this movie, perhaps that’s the reason why it was praised at the Moscow Festival.
There’s no need to describe the plot which takes place in one day only and it shows the life of four neo-fascist misfits. The beginning has an incipit which is political in itself: the funeral of a former fascist general. From this moment on, violence and absurdity will be the main themes: from the bicycles damaged by Beccaria students to the ideological essay written in class; from the girl who is being convinced to make love to the most coward young man in the group to the attempted attack on a labor union headquarter.

Clashes are present even within families although Lizzani doesn’t show the same compassion of Bolognini (Murder charge for a student, also known as Chronicle of a Homicide or Italian Streetfighters, 1972): he’s not good at dramatic scenes to the point that the difficult relations between mother and son or father and son are depicted with annoying dialogues, sometimes irritating. The analysis of the middle-class family’s only goes so far, mainly pointing the finger at their political views, while interpersonal relations and generational conflicts among family members is depicted in a very cold and distant way to be effective.
The end is awful, almost suspended, after some convincing sequences of fights such as the chase and the stabbing of a Democratic young man followed through the streets of Milan and then killed by a gang of fascists. The four responsible got arrested thanks to the victim’s girlfriend who recognized the aggressors and she helped the police with the investigation.
Some sequences are memorable for their surreal and exuberant tone, for example when the guys take some rubber dildos from a sexshop and they have fun shocking the pedestrians. This results in a famous joke by the commissioner: “Once they threw subversives out of the windows, now only rubber dicks”.

The most famous actor is Walter Valdi, who plays the commissioner, is  dubbed with a southern Italian accent. Considering that it is formed by non-professional actors, the rest of the cast gets by rather well despite the artificial and heavy dialogues, which can annoy the spectator.
The narrations reminds of Pasolini’s screenplays such as La nebbiosa -unreleased in its original form- which narrates the crazy night of a bunch of  Left-sympathizing guys from Milan.
The soundtrack, composed by Morricone, is cold, rich with synthetic sounds. Pasquadibisceglie as sound engineer takes care of this important aspect recording many background sounds live to suggest realism. The photography, by Pozzi, is on the same level while the editing, by Fraticelli, is syncopated and slow. The director’s technique is exquisite due to the use of panoramic, long shots and several individual close-ups. The zoom is used thriftily with effective slideshows which follow the group’s life according to the best neo-realistic lesson.
This is a political movie shot in a documentary style which must be appreciated for itself, as a memory of a time when people were killed in the name of absurd ideologies. We can’t say that times have changed, but perhaps we take comfort from the discovery that the past hasn’t always been better than the present.