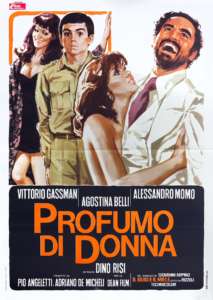 Scent of a Woman (1974) is an Italian Comedy Film based on Giovanni Arpino’s novel The Darkness and The Honey (Il buio e il miele) and adapted by Risi and Maccari. Halfway between pathos and black humour, the film stars Vittorio Gassman, Agostina Belli, Alessandro Momo, Moira Orfei and Franco Ricci.

The director tells the story of a captain who, after becoming blind because of an accident, refuses the pity of the other people and pretends to be a cynical ladies’ man. He actually suffers due to this situation and also thinks about committing suicide. However, a soldier (Momo) who accompanies the captain on a journey from Turin to Naples and a girl’s love will be able to make him change his mind.

Gassman was majestical and won the Palme d’Or in Cannes as Best Actor. The movie also had two nominations as Best Script, Best Screenplay adapted from other material and Best Foreign Film. A terrible remake of the movie was released in 1992. The title was Scent of a Woman – Profumo di donna, staring Al Pacino and Chris O’Connor and directed by Martin Brest.

Scent of a Woman is Arpino’s novel on the big screen. It was written along the lines drawn by the great (and forgotten) writer from Turin, who was characterised by a direct and lucid style, ready for the transformation into images. The on-the-road movie was shot between Turin, Genoa, Rome and Naples and talks about the train journey around Italy of a blind captain who would like to find his beloved woman before committing suicide.

The director alternates between intense dreamlike parts and flashbacks as well as screened overviews, mainly Genoa (the port), Rome (the view from the balcony of his uncle – who is a priest) and Naples (the seafront and the gulf), poetic sequence shots and evocative close-ups. Risi’s camera examines the human poetic feelings and digs into the innermost depths of the human soul, outlining the character of the unfriendly protagonist and gradually revealing all his weaknesses.

Some sequences memorably outline the wickedness of the captain: when he kicks a man from Pisa out of the railway coach with rude words, when he insults a colleague of his pretending to be unaware of the fact that the colleague is still sitting at the table with him, or when he takes advantage of a young, Dutch nun and asks her to help him with the micturition. However, his conversations with his uncle, the priest, contrast with these scenes. The captain asks the priest for his blessing and this seems to make the character more human, ready to accept the will of a God he does not believe in. The captain would like everyone to believe that, after losing his eyesight, the only thing he misses about it is seeing a woman’s beauty, which he can imagine through the smell of their scent anyway. He appears to have no interest at all in enjoying the view of Genoa, Rome and Naples. Instead, he despises the cities, talking about them with vulgar epithets and belittling descriptions. And he seems even less interested in his city, Turin. Only women matter to him.

The Risi`s cinema talks about the everyday life at that time. It talks about the streets of Genoa, the prostitutes in the city’s alleys and the suburban clubs near the harbour. It tells about the luxurious and lascivious nightclubs in the capital city, Rome. It talks about the sea of Naples, that gets dark when some threatening clouds turn into rain. And it talks about an unconventional love story, that ends with a scene halfway between drama and pathos: the blind man falls onto the ground and (finally) begs a woman for help – the woman who is in love with him.

The incredible soundtrack by Armando Trovajoli – unforgettable and heartbreaking – intensifies the most dramatic scenes of the story, while some light music (like Champagne, by Peppino Di Capri and Il Canotto, by Davoli) serves to lighten the tragedy which is just about to happen.

The script is perfect and without any dead spot, at some point it mutates from a comedy into a drama with a hint of mystery. Thanks to the numerous scenes that were shot on the balcony, it is possible to appreciate the beauty of the cities. These suggestive locations represent the ideal scenography where the plot takes place. 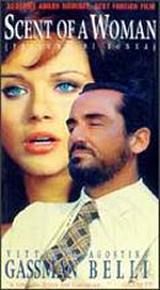 Vittorio Gassman is the very star performer of this film. He is omnipresent in the role as the blind captain, who treats everybody as badly as if he wanted to punish them for his own disability. The man who would need some help, but does not desire it. The one who hides behind the mask of a perfidious and cynical man, whereas he is hurt and in love. “I am the eleven of spades, the card unsuitable for any deck”, he admits to his attendant during the intense ending.

This is the last film by Alessandro Momo – a rising star of the Italian film industry – who died that same year (he was only 17) in an accident while riding a motorbike that he was not allow to ride yet. Momo (dubbed by Sandro Acerbo) is the young and attractive attendant, dominated by the captain.

Agostina Belli (dubbed by Vittoria Febbi) – a beautiful and talented actress with an unexploited humorous potential – plays the most famous part of her entire career, winning the Italian Golden Globe (il Globo d’Oro) as best actress, even though working together with Gassman was not easy. Agostina Belli also had the idea of shooting a sequel but it has never been accomplished.

Alvaro Vitali has a small supporting role as a waiter; he is dubbed, but not yet known to the public, indeed his voice is not recognizable, only today do we pay attention to it. Moira Orfei plays Mirka, a prostitute from Genoa’s alleys.