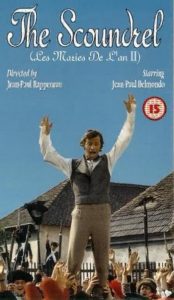 The Scoundrel (Gli sposi dell’Anno Secondo – The Married Couple of the Year Two), directed by Jean-Paul Rappeneau in 1971, is a very French classic picaresque swashbuckling comedy, with an effervescent structure, a drama based on twists with a very attractive cast. A big-budget film, this is a comedy that at times borders on farce, and does not disdain Bud Spencer and Terence Hill’s style fistfights and sequences that highlight Belmondo’s physicality.
The film starts with a background scene in the snow that sees little Nicolas and Charlotte – inseparable since childhood – in the company of a gypsy who foresees their future: the first will find his way into a new world, the second will become a princess.
Once the two are become adults they get married, but in 1787 Nicolas (Belmondo) is forced to leave Charlotte (Jobert) and to flee to the United States, after killing a noble suitor of his wife. Seven years later, Nicolas returns to France to divorce from Charlotte and be free to marry a young American heiress, but he gets involved in the post-Revolution riots and takes part in the struggles between the sans-culottes and the aristocrats. He finds his wife Charlotte, who has not lost the habit to be courted by noblemen, and he realizes that he still loves her and manages to win her over. After a series of incredible adventures, he is convinced of the need to stay in France and starts his career as an officer under Napoleon. The gipsy’s prophecy somewhat comes true, because Nicolas is appointed prince for war merits overseas and his wife becomes a nobleman’s partner.
Jean-Paul Rappeneau shoots an original story that respects all the rules of genre cinema, written in an effervescent way with Sautet, Claver and Benelli, photographed between intense light and chiaroscuro Renoir style and edited without downtime Gillette style.The soundtrack by Legrand, opera buffa and can-can style, with quadrille hints and pieces of classical music is excellent. The era’s reconstruction is perfect, many scenes are filmed in the studio and in Romania, to economize, but there is a great display of means and extras, with battle and chases sequences well managed by the master of arms. The actors are all good; it goes without saying that the film is built on the histrionic and physical Belmondo’s qualities, who claims among the performers Laura Antonelli, at that time his life partner. The main female character is played by Marlène Jobert, who was actually the third choice after the part was turned down by Catherine Deneuve, Warren Beatty and Julie Christie (who could have acted as a producer), but effective in a brilliant role as a superficial enamoured female. Laura Antonelli does not play a major role, she is Pauline De Guerande, sister of the Marquis (Sami Frei) who, not only did attempt to murder a revolutionary but is also a jealous and enamoured girl, rather incestuous too. She looks absolutely beautiful in her green dress with a generous low neckline, as she plays a suggestive and erotic role, turbid and chaste at the same time. The film is a comedy with elements of Feydeau style farce, including husband and wife’s swapping, lovers hidden under the bed, escapes to win one’s beloved over again, betrayals, fraternal jealousies and misunderstood loves. Comical and satirical references to the Revolution are also evident in the film, a sign that the French are able to smile even about their most important historical moments.
The Married Couple of the Year Two, however, suffers all of the swashbuckling movie limits: despite the good rhythm and the lively dialogues, it never raises from a basic mediocrity that does not involve the viewer. Many critics in fact misunderstand the reason why Nicolas flees the United States: to be fair, let’s say that this is neither about politics, nor quarrels, but about the murder of his wife’s suitor.
Jean-Paul Rappeneau (Auxerre, 1932) is a very perfectionist director, he writes all the subjects of his films and is responsible for the screenplays (he started his career in films writing for Louis Malle). He produced only nine films in 49-year career; the very latest one is being produced at the moment. The Scoundrel was his second work, after A Matter of Resistance (1966), while the films for which he is remembered are Le sauvage (1975) – starring Yves Montand and Catherine Deneuve – and especially Cyrano de Bergerac (1990), with Gérard Depardieu, for which he won 10 César Awards (including one for best director). His latest works are Bon voyage (2003) and Belles familles (2015), which has not been shown in Italy yet.
One has to mention the photography director Claude Renoir (Paris, 1913 – Troyes, 1993), who between the thirties and the fifties worked closely with his uncle Jean Renoir, while in the sixties and seventies collaborated several times with Roger Vadim (Barbarella).