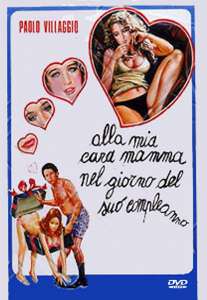 To my dear mother on the day of her birthday (1974) represents the encounter between Luciano Salce and Paolo Villaggio, but Eleonora Giorgi and Orchidea De Santis are also important to make a scathing satire of “momism” and the noble environments. Federico (Villaggio) is thirty years old, but his oppressive and caring mother (Kedrova) does not let him grow, makes him dress like a child, feeds him with cod liver oil and guides him giving blunt but resolute orders. Federico unleashed his repressed sexuality on inflatable dolls that he gets from Denmark, the erotic myth of a generation of teenagers who fantasized about the alleged sexual freedom of the Scandinavian countries.

His relationship with his mother is love and hate, a kind of unresolved Oedipus complex, leading Federico to make fierce jokes against the woman and aborted attempts to get rid of her domination. The atmosphere of the film is surreal and grotesque, sometimes imbued with morbid eroticism and irony that mitigate the darkest moments.

Luciano Salce also touches on the theme of homosexuality, quoting Freud and the fear for the female sex, but remains on the surface with the description of a stereotyped gay couple that hates women and is attempting to rape Federico. The boy’s life changes when the granddaughter of an old servant died in a domestic accident is hired. Angela’s beauty (Giorgi) wins Federico, even if the girl limps while walking, but not only him, because all the men of the house are trying to touch her. Some scenes are quotes and a tribute to the erotic movie Malice (1973) by Salvatore Samperi. Just think of Eleonora Giorgi climbing a ladder while his uncle (Faà Di Bruno) looks at and caresses her legs, or the sequence of the dressing in the bedroom with Federico peeking at and putting some coins over her body. Angela and Federico fall in love and he gives her his mother’s emerald engagement ring, but the hag takes it back by force. Finally, the sexual relationship between Federico and Angela is consumed at his mother’s bedroom foot who is seized with a sudden illness as soon as she catches them. Angela is thrown out of the house and the son returns to celebrate his mother’s birthday in the castle. Nevertheless, the girl has no intention to give up and tries to get her love back, while the mother prefers to kill his son rather than grant him to another woman.

Paolo Villaggio is very good in playing the role of a bumbling dominated son, which is not easy to make it believable, especially while showing weaknesses and morbid fantasies. Orchidea De Santis plays a small role, she also seduces Federico and shows a bare breast, but the director decides to make her ugly (not an easy challenge!) to emphasize the irony of her role. Eleonora Giorgi is beautiful and sexy, generous with her sculptural total nudes in the bathroom, in the bedroom, in front of the mirror, even on the kitchen table or at the foot of Federico’s mother bedroom. Antonino Faà Di Bruno is not a professional actor (a retired army sergeant), but he easily plays Federico’s uncle who’s suffering from Parkinson’s disease, nicknaming him as “Pipette” and reproaching him of being homosexual. Lila Kedrova is a perfect oppressive mother who doesn’t let her son even breathe and vents her perfidy on the servants.