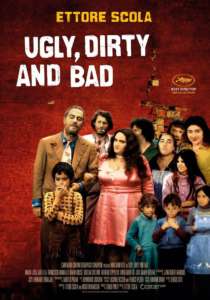 Down and dirty is too important to simply be defined  by a movie genre. A grotesque comedy, perhaps, but sometimes also a drama and a neorealist story that in a short period of time follows, even stalks, the characters into the depths of their existence.

The inhabitants of some shacks in Rome are ugly, dirty and bad, so poor and derelict that they do not even dream of being able to improve their living conditions. They live on the fringes of existence in a neighbourhood populated by desperate people on a hill from which you can discover the stunning landscape of Rome. Nino Manfredi is the extraordinary and absolute protagonist of the story, a filthy man, blind in one eye, an alcoholic, who protects  his fortune, received by insurance, from his even more filthy children and relatives. There are no positive characters in this movie: each of them tries to survive in a particular selfish way. Some people exploit their bodies to bring some money home, others commit robberies and thefts, go to the city to carry out obscure jobs and invent some abusive ones.

The suburbs of Rome in the early 1970s had already been studied and analysed by Pier Paolo Pasolini in many films and novels. Scola uses another inquiring eye: he doesn’t want to denounce but to represent the reality in contrast to the Pink Neorealism and the cloying  poetry of “the poor but beautiful”.  In the foreground there is the moral and material degradation in which the inhabitants of the slums in Rome are forced to live. It is described  by the very little heroic life of a large family with an Apulian origin, headed by Giacinto (Manfredi), who hates his family and is in turn sincerely despised by all.

Scola e Maccari  narrate the routine, without important plot twists until the final part: they  describe the awakening and the day spent in the ordinary fight to survive using more or less legal methods. The gist of the story is the hunt for million liras that Giacinto owns and jealously hides – everyday in a different place – but that everyone longs for fulfilling their dreams, given that grandmother’s pension is not enough. It is amazing the part in which Giacinto believes to have been robbed, but he doesn’t remember the hiding place: the poor devil was too full ofanger and among blows and gunshots he ends up in central police station in front of the police commissioner. In a sentimental way the love story between Giacinto and Iside – famous Neapolitan prostitute – who is taken home by the cross-eyed and drunk person in order to share the wedding bed. The Relatives plan to take revenge not so much for jealousy, but because the man fritters money away on dinners and spending sprees with the partner (who gives herself to everyone) and they risk not to have their share. The plan to eliminate Giacinto takes  the waiting on poisoned macaroni during the baptism lunch of a nephew into consideration, but this creepy intention doesn’t end well because the man pukes the awful food  in time. Giacinto wants to avenge himself by setting the shack on fire with the relatives inside (but everyone saves  themselves) and in the end by selling the home to another family of displayed people. In the final part life restarts even in worse conditions, as the two families decide to live under the same roof. The embarrassed little pregnant girl who goes out to take water since early that morning, while Rome wakes up is the meaning of life that goes forward, of an existence that, despite everything, goes on among thousands of difficulties.

Left wing critics destroy this film, with the exception of Alberto Moravia, who likes the director’s as well as   the cinematographic makings, but he is not warm when he talks about a new contemplative and apathetic aesthetics which is even without dramatic intervention.

The  direction is extraordinary thanks to tracking shots and sequence shots, zooms and close-ups, panning shots of a sunny Rome which is photographed from the dust of a shanty town.

Often non-professionals actors, little known and mostly characters anyway, dominated by a well-known Manfredi  in one of his best performances. In any case, they are all in the right place in this grotesque, black and hopeless comedy, which traces human paths that see their fates marked in the folds of their faces.

Desolation and squalor are the distinctive features of the movie; Trovajoli’s persuasive and sometimes popular music underlines the background tone of dark despair, but also of a calm acceptance of an immutable destiny. The climate is Pasolinian, without redemption, among scenes of violence, Roman-Apulian dialect, children enclosed in a menagerie like beasts, boys and girls exploited. Family fights, transvestites, incest, nurses who jack off old men, dreamlike dramas where what counts is to protect money, one’s own stuff of verghiana memory.

Some of the sequences are really poetic: the initial awakening of the family in a long sequence and the ending full of hope – even in the every-day desolation- with the little girl heading  to the fountain.

We remember the love sequence, composed of long glances and smiles rather than words, between  Giacinto and Iside. The big macaroni with  bolognaise sauce is epochal: a family reunited at a long table after a desperate trip to the city to baptize a nephew, with the suspense of a thriller while waiting for the poison to run its course.

The Pasta is in the foreground, short, rich in tomato, fried eggplant, pecorino cheese, very much seasoned as the southern tradition requires “The ones without the poison were really good. It’s such a shame that you didn’t eat them”,  Iside would tell  Giacinto, defusing a sequence as hard as realistic.

Down and Dirty  was shot in the Monte Ciocci area of Rome, with an extraordinary panorama overlooking the St. Peter’s Dome and the Olympic area, a place really occupied by shacks until 1977.