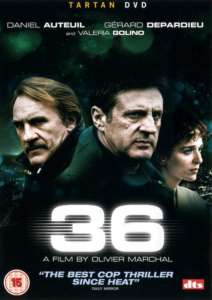 Paris. For several months a gang of delinquents operating with impunity commit crimes of cruel violence. The director of the investigative police frankly says to his two closest collaborators that the one who will be able to dismantle the band will take his position. The two, who were once great friends, are now very distant, forever separated by life, by work, by their men and by loving the same woman. Between the two great policemen a no-holds-barred war is now declared.

It looks like the plot of an action movie, or a classic detective story in the style of “Internal Affairs”, but actually we are not dealing with a genre film. This film – directed by the former policeman Olivier Marchal – is inspired by the “polar” tradition, but goes beyond the limits apparently imposed by the genre cinema and offers us a close-up description of human beings, with their flaws, their passions, their humanity.

The story is semi-autobiographical, and is dedicated by the director to captain Dominique Loiseau, who died in a shootout in 1989, and of whose team Marchal was part. Almost a true account of the story, in which the hollow faces of Auteuil and Depardieu show us all the humanity of bad choices, make us experience and feel it. Dussollier also gives his personal contribution, impassive and formal till the end, even in front of tragedies and feelings. Valeria Golino, although not a central character, plays her role very well as the driving force of the plot.

The story is carried out with sensitivity and without complacency, the dialogue is bare and effective, the dramatic situations never drift into melodrama or emotional extortion, although in some sequences passions make their way, and touch elementary but inalienable feelings.
As I said, the characters are human, even too human, and the author doesn’t avoid digging into their humanity by showing all their ambiguities and their limits.

Depardieu is brilliant in the role of the unscrupulous cop ready for anything, really anything, just to reach a position of power. With an unusual mustache in the first part of the film, he looks like a cowboy exhausted after a thousand duels, and gives a perfect portrayal of a policeman defeated in his own expectations, playing his last cards trying to reach, at least in appearance, the greatness he never achieved. In the second part, shaved and cleaned, he is magnificent in the role of the dishonest and corrupt politician. But he can also make us feel the pain of his character, torn between outbursts of feeling and unbridled ambition.

Dussollier is his perfect counterpart, and by a few clear and insightful jokes he gives us an interpretation of reality through politics. He is paternalistic and indifferent as anyone who has learned how to be ruthless and get ahead.

On the contrary, Auteuil’s character speaks his mind, and this is what gets him into trouble. With a groggy boxer face and a resigned appearance, even more melancholic than in “The Lost Son”, he is a broken man still fighting against windmills, and is likely to be blown away. So much that, when he could be free, for the second time he chooses to lose all that had already been taken from him.

The other actors are all perfectly within their roles, and demonstrate very good acting skills. The direction is accurate and fully functional, so much that it could be envied by many American directors. The violence is dry and never pointless, rhythm is pressing but not hectic as it would have been in the U.S. The images immerse us perfectly in the story, making us forget where we are for nearly two hours.
But the real strength of this film is the script, with an impeccable structure, with characters perfectly outlined, not described but shown through their actions and dialogues: neat, essential, free of excess. Moreover, the strength and credibility of its dialogue are really rare in contemporary cinema.

The predictability of the final – though not amiss – can be forgiven because of the frame of the story. Not a genre film, a true masterpiece. Definitely a must see.