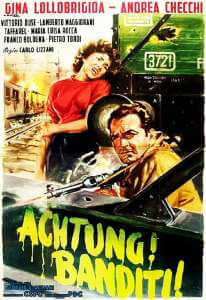 On the hills of the Ligurian Apennines, next to a ramshackle house, there is a sign that says «Achtung! Banditen». Carlo Lizzani’s debut on the big screen focuses on a group of bandits who hide in the mountains, waiting for the cover of darkness to sabotage the Germans.  The action takes place in a factory in Pontedecimo, in the suburbs of Genoa, which becomes the stage for one of the many and bloody peripheral clashes that characterized the Resistance during the final phases of the war.  A brigade of partisans, who hide out in a villa not far from the city after a long march, is preparing a raid on the production plant to steal a consignment of Germans weapons. At the same time the workers, whose opposition to the Nazi occupation takes the form of constant strikes, are forced to work ceaselessly by the foreign forces to dismantle machinery destined for Germany. During the long night of the incursion, the united efforts of the armed partisans and the workers will determine the success of their disruptive actions:  the fighters play their part in disassembling  the industrial equipment (to prevent it falling into enemy hands), while the workers take up arms and join the retreat to the mountains under heavy German fire.

The film was funded by the local population and strongly reflects the cooperative spirit which enabled it to come about. By using a language which is characterized by a strong ideological component (some scenes are didactic, such as when the partisans improvise a democratic assembly while the Germans are at their heals), Lizzani proposes his personal interpretation of the Resistance, which is not represented as a military phenomenon dominated by the war efforts of partisan-heroes, who are sufficient in themselves, but rather as a widespread movement in society sustained by the fundamental contributions of many social forces. The fight of the workers and the rebels is animated by the generous humility of the farmers who hide the fugitives in the stables and offer them a loaf of bread; by the technical skills of the engineer and the shrewdness of the diplomat, representatives of the upper-class who will pay for supporting the insurrection with their own lives; and finally by the precious participation of the “alpini”, last minute heroes who offer a crucial contribution to the common cause.
The choral orientation of the picture is manifested by the contrast between two opposite movements that give rhythm and fluidity to the development of the narration: the events set in the factory (the hub of the movie) give life to centrifugal forces which produce a complex mosaic of twisted stories. The narrative universe of “Attention! Bandits!” is full of deeply human characters, painted with rapid and sharp brushstrokes which portray authentic suffering and dreams and reveal the poetic component of a work where the political element is dominant. The Resistance is represented by the rashness of the partisan Napoleone who leaves his safe refuge for the city, just to meet his son for the first (and the last) time; or Gatto’s relief when he holds a young peasant girls’ handkerchief to his chest just a moment before he blows himself up with the enemies. The movie is marked by a composed and measured direction which portrays static dialogue and scenes more easily than scenes of fighting (probably because of budgetary constraints). The film editing allows the spectator to move thorough a multitude of places (the Apennines, the country villa, the river, the city, the factory) and characters without ever losing a sense of time and cause.  The story is not centered on a leading protagonist and no memorable interpretations emerge from the opaque performances of the most famous actors.  In particular, Gina Lollobrigida (“Bread, loves and dreams” 1955) is not convincing in the role of a confused and disoriented secretary and Lamberto Maggiorani (“Bicycle Thieves” 1948) risks falling into oblivion in the middle of  the workers of Pontedecimo.
Thanks to “Attention! Bandits!”, Carlo Lizzani’s cinematographic debut is cast amongst the milestones of that Italian neorealism which was born from the rubble of the war. By using a language which is closer to Rossellini’s analytical objectivity than to De Sica’s modern fairy tail, the novice film maker lays the artistic groundwork of his own personal search for a cinema which is  attentive both to great political and social dynamics and to the human stories that flourish as a result.

English translation by the author (edited by Ester Tossi)