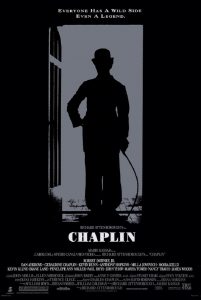 Charles Spencer Chaplin’s life, works and wives, alias Charlie Chaplin, undisputed genius of silent films who has been able withstand times and the passage to talking pictures by his own versatile roles like actor, director, screenwriter and composer. Movie starts from Chaplin’s childhood with his first vaudeville stage performance while replacing his own mother, who was a very common actress with mental problems. Movie goes over Chaplin’s story through a fictitious interview that he would have granted to his biographer. Right after, scripters William Boyd, William Goldman and Bryan Forbes dwell upon the birth of Charlot’s character with which Chaplin will always be identified and showing us a cross-section of golden age silent pictures. Directed by Richard Attenborough (a specialist on biographical films such as Ghandi) succeeds in showing us both Chaplin’s human side, perfectionist and obsessive to the utmost, and the artistic side, by rebuilding the sets in which Charlot shot his own pictures.
Cinema in the cinema to tell the story of the man who made of the Seventh Art an universal language in his silence, his ability of showing, touching and making people laugh only through images, of making satire of the establishment, deriding and even criticizing it (Modern times). A brave artist who, in The great dictator, dares picking on the most fearsome and obscure personality of modern history, Adolf Hitler. In spite of the negative critics (at that time, in the USA, the nazi ideology is not completely unknown thanks also to personalities like Henry Ford, Charles Lindbergand and the Ku Klux Klan movements) Chaplin succeeds in making a masterpiece: his own first totally talking picture, for which he will be later on charged of comunism and deported from the USA (especially because of the final speech).
A man who always sided with the weakest, born and grown in poverty and hunger, Chaplin succeeded in being ironic also on the manias of his times, like in The gold rush, where Alaska becomes the land of plenty, thanks to the discovery of gold.
The film investigates all this and much more, during two hours and a half with an outstanding cast, at the time one of the best; maybe it does not deeply succeed in getting to the heart of many of the matters, but it succeeds in giving us the portrait of a human being who had made of Cinema his own life. A man full of faults, an incorrigible womanizer (Don Juan) who gave to the wife of the moment the co-star role in his feature films and asked for a special care and a bigger commitment r than the one he gave to their life as a couple. A movie for cinema lovers, but not only’em: an historical work, a comedy and also a dramatic film. All this is Charlot, the story of a genius.