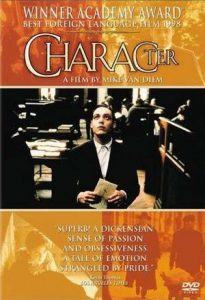 In Rotterdam in the Twenties, young lawyer Jacob Katadreuffe, still an apprentice, is arrested despite claiming to be innocent of murder. He’s accused of murdering Dreverhaven, banker and bailiff fought at a distance by Jacob throughout his youth, as recalled during the interrogation. Dreverhaven has been one of the most relentless persecutors of the working class in town, acting mercilessly during evictions. Jacob is the illegitimate son of Dreverhaven and his maid, Joba. Grown up in poverty, he tried to break free but, after having got a loan to buy a tobacco shop, he ended up in bankruptcy and had to stand trial for debts. Nevertheless, he manages to climb the hierarchy despite the hostility of his father who turns out to be the owner of the bank that granted the loan.

The title of the film would undoubtedly have been more suitable to represent this story: in fact “Character” is the perfect synthesis of the conflict that Van Diem enacts, the one , between ironclad personalities not willing to bend. The strongest of the three is Joba, the silent mother at the center of the struggle between the other two.

Winning the Oscar as best foreign film, this movie is adapted from two stories by Ferdinand Bordewijk; it fields many questions without resolving any, intentionally. The purpose of Van Diem is to tell the story of the characters and to see it through, not to provide answers. And this is certainly an advantage, because at the end of the movie, however, we feel the story is concluded, without false morality and without emotionally blackmailing endings. The characters are tragic masks, victims and executioners at the same time in a drama that has its roots in the function of money, the true focus of the story, and in the Calvinist morals.

One gets the impression of having read a novel, rather than having watched a movie, so intense is the literary plot. Yet the pace is great, the story holds up well and the screenplay is flawless: a perfect device to be watched, with a palpable and engaging tension, built, for once, not as a silly little action movie, but as a story of a very different caliber.

The film making is perfect, I’d say even in a workmanlike manner, as for the period reconstruction, and perhaps because of this a bit cold: but this is an obvious choice, given the coldness of both the landscape and the characters that live in it. Also impeccable are the actors, each perfect in his role.

If auteur cinema had many more screenplays written so well to base a film, probably much of the public wouldn’t be discouraged.