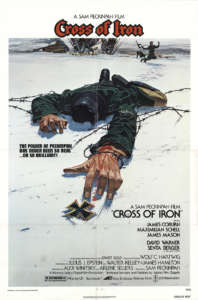 For some it is a certificate of honor of incalculable value, for others it is only a piece of metal. Sam Peckinpah draws his disillusioned and provocative fresco of human pettiness, cruelty and bravery around the four arms of the cross of iron, a military decoration established by Prussia’s king and inherited by the German Reich. He uses an odd point of view, often set aside because of its historiographical inconvenience. In fact, he focuses the camera on the last platoons of the Nazi army during the ruinous retreat from the fragile oriental front. The movie is set in the wild forests of the Taman peninsula, in Crimea, where the highly decorated corporal Steiner commands an isolated scouting platoon. Steiner is a veteran disenchanted with every warlike rhetoric who deeply hates the Wehrmacht, but still keeps on fighting following a personal code of honor and loyalty to his men. However, because of his reckless behavior and his intolerance towards his superiors’ orders, he will attract captain Stransky’s antipathy. Stransky is a descendant of an ancient family of Prussian military elite who arrived from Paris with the precise purpose of conquering the cross of iron at all costs. In order to gain the coveted honor, hetakes advantage of the disorder caused by a soviet offensive and he tries to take credit for having led a German counterattack by deception, calling Steiner to act as a witness. Steiner knows that Stransky hid in his bunker during the attack, but in front of the officials he remains silent: he neither endorses Stransky’s thesis, nor disavows him. In fact, Steiner considers their conflicts as a private matter.

Steiner’s life becomes a threat to his rival’s, who risks being put on trial by the martial court: blinded by selfishness and vainglory, Stransky doesn’t passthe peremptory order to retreat on to Steiner’s platoons leaving the corporal and his men beyond enemies’ lines, in a tragic fight to survive between the crossfire of the two armies.
[***] With Cross of iron, Sam Peckinpah (The wild bunch, 1969 and Straw dogs, 1971) repeats his idea of anti-establishment cinema that has made him one of the New Hollywood’s pioneers. Starting with an estranging historical perspective, always poorly investigated by the cinephile universe, the director, whose
films have already proved to be quite brutal, for the first time deals with the most extreme form of violence: the war. Peckinpah is far from any desire to apologize or to incriminate Nazism and he brings on the screen all the contradictions of a world, that of the third Reich, on the edge of crumbling. In a landscape dominated by rubble, debris, explosions, splinters of mortars and dust, every conquest of mankind reveals itself to be deciduous. War becomes the place of the absolute practice of the non-thinking, which is symbolized by the words of Steiner to a young Russian prisoner: «I can’t keep you here: you make me think, and you make the others think. Here we can’t think: we have lost the right to do it».
In this theater of inconsolable irrationality, men can follow evanescent illusions of glory, as Stransky does with the cross of iron, or they can indulge in a desperate laugh, as Steiner does in the last, tragicomic sequence. In order to underline the topics covered, the direction uses a raw language that oscillates between hyperrealism and hallucination (as in the skilfully made scene of Steiner’s convalescence tormented by paranoid visions) and that is further enhanced by a frantic editing which bombards the spectator with sounds and images, projecting him in the bloody frenzy of war action, where space for thought inexorably shrinks.
Visionary, anti-Hollywood and unconventional as its protagonist, this movie represents the maturityof the director’s cinematographic career, started with westerns first and continued during the Sixties and the Seventies. Accused by many of fascism and misogyny (the scene in which a soldier is emasculated by a woman is very bloody), the work was successful and it led the way to a generation of directors (as Martin Scorsese, John Woo and Quentin Tarantino) which were inspired by its innovative and border-line features. If reactions are the barometer of a provocation’s success, with Cross of iron Sam Peckinpah has completely reachedhis target.