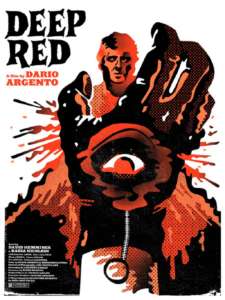 We attended a parapsychology conference in Rome. In that same room, Helga Ulmann (Macha Méril), a German medium, felt the presence of a person with deadly thoughts, someone who had already killed and would kill again. That same night she would be murdered and like her everyone who came close to identifying the serial killer. The English pianist Marcus (Marc) Daly (David Hemmings), who’s also a conservatory teacher and eyewitness of the medium’s murder, would privately investigate the case.

One of the main themes of this psychological thriller is the fallacy of memory. As Dario Argento says, memory is a theme very close to him. Memory is never accurate, it changes in our mind over time, it’s shaped by our culture and our beliefs and it’s the reason why witnesses have different interpretations of the same event.

With Marc, the viewer experiences the deception of perception firsthand. The mirror becomes the symbol of this scam: going from being the most revealing object to deceiving ourselves, even if it contains the truth.
In this regard, the influence exercised over Argento by Michelangelo Antonioni’s masterpiece Blow-up (1966), to whom he’s definitely in debt is clear. In fact, in both movies, the main character, played by Davide Hemmings, falls victim to the unreliability of his own eyes.

In the famous night scene filmed in Turin, in Piazza C.L.N., where Marc and Carlo (Gabriele Lavia), also a pianist, appear so small compared to the monumentality of the anthropomorphic allegory of the Po. Right on the edge of the fountain, echoing the atmosphere of the famous scene in La Dolce Vita, Carlo gave the key to read the film: “You know, sometimes what you really see and imagine it mixes in the memory like a cocktail, whose flavors you can no longer recognize”. “But I’m telling the truth!” “No Marc, you think you said the truth, but actually you’re just repeating your version of the truth”. This talk took place on a long shot, as if to declare a universal message which transcends strictly narrative boundaries. Therefore, Carlo becomes the ambassador of a personal and very heartfelt thought of the director.

Carlo was one of the most interesting characters thanks to his complexity. He was another victim of his mother: he had not been destroyed physically, but psychologically, from the moment he had witnessed his father’s murder. Carlo took refuge in a life of excesses, but found his own salvation in Art: starting from the drawing he did as a child, but in particularl with his carrier as a musician. He will say to Marc: “You enjoy doing Art, while I do it to survive and it’s not the same thing”. Only afterwards could we understand that he was not referring exclusively to the economic dimension.
Carlo would later turn out to be homosexual and this was the opportunity for Argento to send an avant-garde message for that time (it was 1975). Marc, after having found Carlo in his lover’s bed, would say: “I don’t care about your choices, but I already told you once that it is bad for you to drink so much.”
Even the female character of Gianna Brizzi (Daria Nicolodi) was modern and independent since she worked in a predominately male professional environment as a reporter. This character led the men around her to reflect till that strong moment of a solid patriarchy erected in a millennium of discrimination.

Music plays an essential role in Deep Red. The soundtrack, one of the most memorable in the history of cinema, bears the signature of Goblin, an emerging and progressive Italian group, brought to success by Dario Argento thanks to this feature film.
In the moments of greatest tension, it’s interesting how the music is played; while Marc’s investigation is accompanied by an insistent guitar riff which interrupts abruptly when he steps on a glass, as it happens to his stream of thoughts.
The diegetic music, the childish lullaby, reproduced by a tape player, serves as a catalyst for the murder, which with it recreates the conditions and feelings of the first murder, awakening its own madness.

As the co-screenwriter Bernardino Zapponi recalls, the idea for the murders was to propose sensations which the spectator could identify with, such as the burning in hot water or hitting pointed edge, compared to a gunshot which few have experienced.
Many the shots of details, starting from the killer’s gloved hands (which belong to Argento), to eyes and mouth. In the same way there is a succession of details such as marbles and dolls; all objects that evoke the world of children and refer to the Freudian concept of uncanny.
The setting, although narratively anchored in Rome and its surroundings, consists of a collage of cities: Turin, Rome and Perugia. In this imaginary city the outdoor settings seem to be pictures in which figures in the background are often unrealistically immobile. The Blue Bar, where Carlo plays every night, is a tribute to the famous Nighthawks painted by Edward Hopper, emblem of solitude that in the film is embodied by Carlo.

The colors are bright like a wide-eyed nightmare. There is a strong contrast between the intense and bright red, which is the undeniable protagonist of the film starting from the title, and the blue, which characterizes: Carlo’s clothes, the neon of the Blue Bar, some paintings and the light inside the medium’s flat, the bathroom of the writer Amanda Righetti, as well as the wallpaper of Carlo’s childhood home. In fact, in these last three settings the murders will take place, making the red of the blood and burns stand out on the blue and light blue. Even Gianna’s face is colored with red and blue when she talks to Marc outside the burnt down villa.
In the victims’ homes the lighting comes from above, creating sharp and accentuated shadows which emphasize the drama of the moment.

The feature film is full of subjective elements which make the viewer participate personally, as if she were present in the scenes; and most of the time, is invisible to the other characters, while sometimes being noticed by them. Like for example, our entrance to the parapsychology conference, where we are welcomed by a steward, who opens up the curtain to us. In Righetti’s house we make a noise so that the housekeeper looks in our direction, straight into the camera; as well as inside the abandoned villa when we stop a little more looking at the drawing on the wall while Marc leaves.

Deep Red is a film that never satisfies the viewer, starting with the variety of shots and points of view. It’s full of elements that lead the feature film either to pass the test of time and its own era without being overtaken, or to transcend its genre in which a film is often.

Tucker: The Man and His Dream

Manuel Vázquez Montalbán – Off Side