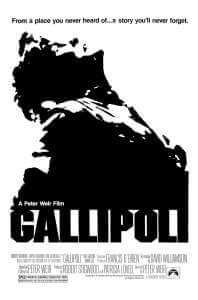 “What are your legs?” “Springs. Steel springs.” repeats Archy (Mark Lee) to his uncle, in front of an improvised track in the dusty air of Western Australia. The chronometer doesn’t lie and he has the potential to become a champion, running with spikes on his feet. But the path of his life will not lead to the track of an Olympic stadium: determined to make his personal contribution to his country’s war effort, Archy undertakes a long and exhausting journey to join the Australian volunteers fighting in the First World War. Once he overcomes his uncle’s opposition (who sees for him a future of sporting triumphs), Archy goes to Perth in order to enlist, sail with the troops heading for Gallipoli, and join his compatriots. On his race to the military front Archy drags into his adventure Frank (Mel Gibson), a penniless braggart who decides to follow him even if he doesn’t have Archy’s idealistic enthusiasm. After walking together through a desert, covering hundreds of ocean miles, and training in the military base at the foot of the Pyramids, united by an instinctive bond of friendship, their stories join those of thousands of men quartered in the narrow trenches wedged into the Turkish coast of the Dardanelles Strait. As the distant and blurred perception of war turns into the brightest of frescoes, Archy and Frank are overwhelmed by the absurdity of a diversionary attack against the enemy forces which, because of botched military orders, will become tragic and predictably inevitable suicide.

The film rightly belongs to the war movie genre, insofar as the war, first as a remote echo and then as a tangible reality, constitutes the narrative apex of the whole story and the pole toward which the events gravitate. However, the particular structure of the film allows the spectator to analyze a more peripheral aspect of the theme: the plot focuses on the years of youth, full of dreams, friendships and ideals, and on their slow and gradual creaking under the weight of bigger forces until they’re broken by war’s foolish violence. In this work, Peter Weir (“Dead Poets Society” 1989, “Master and Commander” 2003) tries to reconstruct a hidden world of affective relationships that are upset and destroyed by external pressures which lie outside the characters’ control (in this way he anticipates a theme that he will develop, analyzing its social implications, in his later work: “The Truman Show” 1998).

Therefore, the narration focuses on the journey undertaken by the two main characters and is interspersed with picaresque literary elements, with a predilection for the extraordinary (walking across deserts, where they find their bearings thanks only to the sun and a pocket watch) and the exotic (soldiers’ adventures in Egyptian bazars and whorehouses). The variety of places, events and situations that characterize the story do not constitute hedonism for its own sake, but represent the wide range of experiences of the two young men on their path to maturity. In fact, once the safe and unvarying environs of their adolescence (the family farm) are abandoned, they dive into the world’s dazzling and dangerous multiplicity, beyond the secure boundaries of that pre-adult age. Their chance friendship supports them and becomes the real linking device of the entire narration. The strength of this magnetic bond is underlined by the choices made by the director, who favors monochromatic backgrounds (like the white Australian desert or the Pyramids at dusk) in order to highlight the figures of the protagonists, standing as clear shapes of emotion against abstract surroundings.

The narrative comes full circle when the metaphor of the race as youth’s exuberant and enthralling power meets its conclusion in the dusty and bloodstained tunnels of the trenches: the war, pursued like a trophy to reward the efforts of the journey, is transformed in the final scenes into a tragic stage on which the protagonists’ energy runs out. A theater where dreams and hopes are curbed by death and by the absurd logic of military orders that seals the fate of hundreds of men (a nod to the genre tradition, in particular to Paths of Glory by Stanley Kubrick); where it is not enough to run “as fast as a leopard” to escape destinies and bullets whose paths we can’t decide.

Translation by the author (edited by Roma O’Flaherty, Emman Riddington)