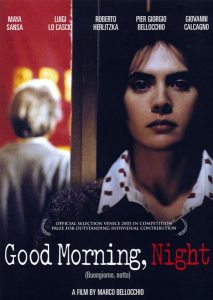 The personal journey of a young Red Brigade[1] member, Aldo Moro’s jailer, between the Via Fani ambush and his murder. A clear-headed, anti-rhetorical and enthralling film.

After his kidnapping, Aldo Moro was held for about two months in a small cell built in a big apartment in Rome, being closely guarded by a group of jailers whose names (Gallinari, Moretti, Maccari) have sadly gone down in history by now. The film retraces the events that occurred during the imprisonment of the statesman from the point of view of Chiara, a first timer Red Brigade member who lives in the apartment: she is not given any “political” assignments and is the only one of the group who has a “normal” life, working as a civil servant in a Ministry.
Together with the TV, which is always switched on, she’s the only contact that the hardcore terrorists have with the external world and she is the only one who questions the importance of what they are doing and the correctness of their decisions. Her days pass guided by the rituals of the office, where a young colleague of hers courts her claiming to write screenplays. By some rather tragic omen, one of these, which has the same title of the film and a very similar storyline , will be found by the ‘brigatisti’[2] in Moro’s briefcase, obviously sent to him to be read by either the same man or one of his acquaintances.

Chiara’s nights are filled with dreams in which she travels through the triumphs of the Soviet Realism and the massacres of the partisans by the Nazis. But the more time goes by, the more her dreams are focused on Moro’s figure, whom she often spies in his cell while he writes and wails, until they get to represent his impossible freedom, just when the fatal hour for his murder has come instead.

Bellocchio’s film starts from an historical point of view (the reference, cited in the end credits, is the book entitled “The prisoner”, in which the ‘brigatista’ Braghetti recounts the days of the imprisonment), but it intentionally omits every political and social analysis of the period, preferring to dwell on the human values that stem from the representation of the events. The point of view is therefore “familiar”, in that inside the apartment the same old everyday life takes place (having meals, nights spent on the sofa watching TV, reading books, etc.) right when, just a few feet away, the prisoner lives his last days.

Moro figure’s psychoanalytic projections in the story could seem unquestionable: his role of “father” seems obvious both in his solemn figure and in his calm reasoning, as well as in the arguments he has with Moretti and, indirectly, with Chiara herself. In this respect, his killing could be regarded as freeing yourself from the trappings and the burdens of his own past, other than from the bourgeois society in which the characters of the film are still inserted and would represent a kind of “closing circle” after the figure of the mother in “My Mother’s Smile”.
Nonetheless, it seems that the director has by now freed himself from the psychoanalytic tangle that negatively affected his work in the late 1980s, which momentarily resurfaces only in Chiara’s dreams. Here Moro, on a par with a father figure, walks freely around the apartment during the night. We prefer to emphasize the young protagonist’s personal journey (played with brilliant intensity by Maya Sansa), which leads her to claim her role of “soldier of the revolution” and then raising doubts about a cold-blooded murder which does not seem necessary to her anymore.

Moreover, History, kicked out of the door, comes overbearingly back (and how could it be otherwise?) from the back door: Bellocchio’s look isn’t forgiving at all towards the jailers (whose slogans are being demolished by the statesman himself with disarming simplicity) and towards the whole political class of that time, to whom Moro directs his heavy remarks, especially during his last talk with Moretti. When he tries by all means to save his own life, Bellocchio cleverly shows archive footage of those men’s petrified faces during Moro’s funeral, which signals the dramatic end of the film. The parallelism between Moro’s letters and the missives of the members of the “Resistenza” condemned to death, is also important as it shows the same sore pattern – a pattern that not only does upset Chiara, when she figures it out, but also us spectators.
There are, however, some imperfections though this film will definitely send political shock waves a positive and important imprimatur has been obtained by Moro’s son, who in a letter has emphasized the humanity of the representation and, once more, underlying the contradictions of the political class in failing to release his father): the figure of Chiara’s young colleague has excessively vague outlines and the insertion of the scenery written by himself seems vaguely specious; here and there incomplete reconstructions of that time emerge, and the insistence on Pink Floyd’s soundtrack, albeit dramatically precise, sometimes seems forcibly inserted; the ‘brigatisti’s tempers are left behind and at times stereotyped.
Besides, it should be remembered that the film was commissioned by RAI therefore produced by Rai Cinema. Despite this, the director makes a serious and meticulous reconstruction, which by fate fits into a renewed “engagement” vein of our cinema that seems to attract the support of producers, distributors and public, and undoubtedly deserves an acknowledgment for the complicated and successful obliquity of the operation.

[1] Brigate Rosse: An Italian  left-wing paramilitary organisation responsible for many violent incidents during the 70s and 80s.

[2] Member of the Red Brigades