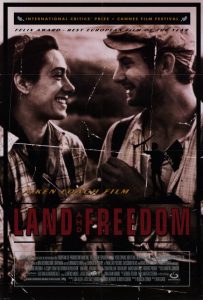 Liverpool. A girl rummages through her grandfather’s things; a worker named David Carr recently deceased of a heart attack. From a large old suitcase, left to gather dust on top of a wardrobe, emerge some letters, newspaper clippings and a red handkerchief wrapping a clod of earth. Reading these papers, she slowly discovers that her grandfather had lived an extraordinary life. A long flashback brings us back to the thirties, when the young David Carr, an unemployed member of the Communist Party of Great Britain, packs his luggage and leaves for Spain to join the International Brigade engaged in the civil war against general Franco’s troops.
On arriving in the Iberian peninsula, David gets enlisted by chance in the PUOM (Partido Obrero de Unificacìon Marxista). In this militia he meets young people from all over Europe, next to whom he can finally fight for the values which had heard so much about back in rainy England. Between long periods of waiting in the mountains of Aragona and sporadic raids on farming villages, David falls in love with Blanca, a sweet and tenacious comrade with which he shares the sufferings of war. Wounded in an arm by a malfunctioning weapon, he is forced to abandon the militia to be cured in Barcelona. After a brief experience in the International Brigade, supported by the government and determined to prune anarchist and revolutionary factions from the anti-fascist front, David decides to rejoin the PUOM and Blanca. It will be the government forces, however, that will definitely quash the military action of PUOM, and with it also the dreams and the hopes of the young Carr, in a tragic ending on bloodstained ground in which we can perceived his desperate need for freedom.

The most original feature of this film by Ken Loach is its ability to combine a celebratory element (through his description of the events of the PUOM comrades, he honors the bravery of the men and the women who fought for their ideals of freedom and justice) with an anti-rhetorical and critical language. His narrative, in fact, often focuses on the fragility of the democratic coalition and the plurality of positions that emerged from it, which will ultimately lead to the collapse of the Resistance front and allow Franco’s triumph. Anarchists, communists, socialists, Stalinists, Trotskyites and revolutionaries forgot the values which united them and fell into a fratricidal conflict in which the echoes of international political interests resonates, and of which the fascists take full advantage following the ancient and effective maxim of divide et impera. In this respect, the ending is itself emblematic – the needless death of Blanca, mown down by the governmental army’s rifles, is the symbol of a dream that crumbles by the hands of its own proponents and of their inability to find elements of coesion beyond the common denominator of their opposition to franchism.
On a similar wavelength is another theme that pervades this work, that of disillusionment – the PUOM comrades and David himself express themselves using ideological language, and reason as if they were at a political assembly (is it better to first collectivize and then win the war, or vice versa?). They are open to debate, to discussion and to a free vote, but then clash with the harsh reality of jammed weapons, hunger and discouragement. It is almost as if the director asks himself if freedom (which is based on thought, diversity of opinions and confrontation) is a luxury that can’t be afforded during a war, by its nature irrational and subject only to the ruthless logic of action.
“Land and Freedom” is not just a political film, however. It deals with the Spanish Civil War from a very personal point of view, that of David Carr, whose experience acts as filter for the whole narrative. An old man rushed to a hospital emergency ward slowly transforms into a young man with an adventurous past, with all its fears, passions and delusions; a man who reminds us that every face, even the most commonplace, hides a story of which we know only a tiny part.
It is this operation, of digging into the past to save a memory that risks being lost, which brings the film’s message of hope. At David Carr’s funeral, his granddaughter casts onto his grave the clod of the earth on which, so many years before, he had fought in the name of freedom. This is an invitation to be curious, to pick up the box of memories and to unearth a past which desperately needs to be preserved, as much as the ideals that inspired it.