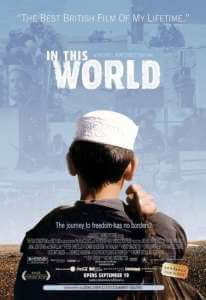 Some Afghan kids are playing in the muddy refugee camp in Shamshatoo near Peshawar looking at the camera, smiling and making faces.
An elderly father has just been informed his son has died and he appears unmoved and haughty harboring his sorrow.
An Afghan young boy, unquiet and suspicious, roams around Cadmen Town’s market stalls.

Those three images, which are alternated at the end of the movie with a cruel and harsh realism, should be enough to positively qualify Winterbottom’s movie: they tell us in fact more about the inhumanity of refugees’ condition, thanks to their engaging anti-rhetoric. These images portray their conditions more clearly than any newspaper article, academic essay or television program produced in the last few years.

Winterbottom chooses the documentary genre to tell the two-Afghan-young boys’ tragic odyssey from Peshawar to London (Jamal and Enayat). It’s not the first time that the English director tests himself with this type of work. We can recall the previous “Welcome to Sarajevo” (1997) in which he tells us about the horrors of the Bosnian war through real movies’ clips and live scenes.
In this case, Winterbottom detached himself from the facts’ reality, he decided to make the spectator believe that the whole sequence of events has happened for real and the scenes had been shot by the two refugees in a sort of “traveling diary”. By doing that, although the movie loses its narrative depth, the director highlights both the plot’s drama and the non-professional actors’ spontaneity; moreover, Winterbottom is “forced” to create a sequel of events in which the further vicissitudes are told after the two boys arrive in London.

Reality, as sometimes it happens, has exceeded fantasy, seen that the real Jamal, once the shootings were done, returned to Pakistan and decided to start, this time for real, a journey London where he lived anguished by the nightmare of being deported.
Without an effective screenplay and relying on the cast’s emotional involvement, Winterbottom managed to create a moving documentary which portrays people’s outrage: every frame is almost suspended by magic, between the utopian rhetoric and the commercialization of pain, even though it is touching and sorrowful in his timeless simplicity.
The gazes and the gestures of these deprived and marginalized people  have the task to throw a silent accusation against a western world which is unable to comprehend their situation; moreover, the director is also capable of including some sequences of pure humanity (we should mention, in addition to the three scenes the movie ends with, some other meaningful sequences, such as the snowball fight in a Kurdish village and the non-sense jokes Jamal and Enayat were used to tell each other when going to sleep).

The fact that the movie won the Cinema International Festival in Berlin, a victory which is questionable when one thinks about the movie’s artistic quality, makes us think that this was a naïve attempt of clearing our bad conscience; nevertheless, it goes without saying that this Winterbottom’s effort succeeds in reviving his career again (after the success of his firsts masterpieces such as 1995’s “Butterfly kiss” and 1996’s “go now”) which is the reason why the movie deserves to be seen. It won’t be easy to watch, but it will be worth the effort.