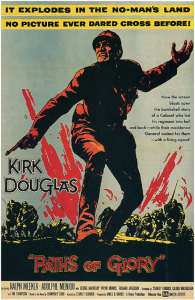 The court-martial trials of the front-line troops, and the resulting death sentences imposed on the soldiers “found guilty” of cowardice, were one of the meanest procedures of the First World War.
Actually, the immorality of this practice didn’t lie in its cruelty, but in the way the army high ranks misused it. Occasionally, it happened that some overaggressive generals, after the total failure of their attacks, shifted responsibility onto the soldiers, and asked the military courts to punish the men of the units lacking courage in action, usually with death penalties. Therefore, because of the incapacity of few to admit their faults, and thanks to a legal sham, akin to a real complicity, many, after escaping the enemy fire, were given an unjust death before the firing squads.

These are the themes of Paths of Glory (1957) that Stanley Kubrick, in his late twenties at the time, took from Humphrey Cobb’s novel of the same name. However, the book was readapted in the screenplay process by the director himself, and the film resulted far less pathetic and much more focused on the representation of the rituals of military power.

The film, with the Hollywood stars Kirk Douglas as Colonel Dax, and Adolphe Menjou as General Broulard, is set in 1916, on the Western front between France and Germany. It recounts the attack that the ambitious General Mireau (George Mcready) decides to launch, at Broulard’s request, to capture “the Anthill”, a well-defended German position, which is virtually impregnable.
After the unavoidable failure, Mireau is determined to punish his troops “misbehaviour”. Therefore he obtains that three soldiers, each representing a company, are court-martialled for cowardice before the enemy. Dax, who is a lawyer in civilian life, offers to defend the men. During the trial, whose sentence is already decided, he will demonstrate the inconsistency of the charge and will question Mireau’s impartiality and leadership.

Paths of Glory is a gloomy and frightful film, deliberately shot in strikingly contrasted b/w photography. It’s centred on the clash between two worlds apart: the shining world of the generals, who hold an absolute power on their men’s life, and the dark world of the soldiers, sent to destruction only to satisfy the ambitions or to save the reputations of their own commanders. To this basic conflict the American director, well known for his perfectionist genius, links every single part of the film, giving it a consistency, which is hard to see in other works of this genre.

Let’s take, for instance, the opposite symmetry of the musical score in the film’s extreme sequences: on the opening titles we hear La Marseillaise, originally a revolutionary anthem, which emphasizes by antithesis the immutable rituals of the military hierarchy; in the final section we hear Der treue Husar, a German folk song, sung by an “enemy” young woman before the French, which gradually prompts the soldiers’ emotions, and clearly evokes a feeling of fellowship between the two sides.
Kubrick also provides some visual signals – the most important of all being, as we said before, the stylistic use of b/w photography – to mark the separation of the two worlds: actually, the places where the generals move, the château, the courtroom, or the execution courtyard, are luxurious like their uniforms, and are constantly illuminated by a glaring, almost blinding, white light. On the contrary, the soldiers’ life is dominated by black: they move in trenches, dug in the ground, they go in their no man’s land missions at night time, they fight on muddy and rough terrains and, waiting for their execution, they are locked in a dark and claustrophobic prison cell.

As far as the actors’ performance is concerned, the basic opposition is portrayed in the scenes where the three main characters confront each other: Colonel Dax, generous and idealistic, who unreservedly supports the soldiers, and Generals Mireau and Broulard, the champions of the hierarchy.
Mireau is the typical high ranking officer, totally prone to the most obtuse ambition and recklessly devoted to the most aggressive military tactics. Broulard is a cunning politician, cynical and inhuman: only to get the opportunity to put Moreau into trouble, he takes advantage of his colleague’s strong career ambitions, and suggests he attack “the Anthill”.

Moreover, after the trial Broulard offers Dax Mireau’s position as he is now in disgrace. At the refusal of a disgusted Dax, horrified for the huge casualties and the execution of three innocent soldiers caused by Broulard’s plan, the general will be disappointed over the missed opportunity. Secluded in his own maniacal universe, where everything is justified in terms of power struggle and intrigue, he considers the colonel little less than a fool.

It’s easy to see that the protagonists are so sharply defined, so lacking in contrasts to run the risk of being perceived as oversimplified. All three of them – particularly Moreau – may appear more symbolic than real. However, the film unfolds smoothly and the characters’ actions are always justified and coherent: this is undoubtedly one of the director’s merits. Actually, Stanley Kubrick is equally great as a film-director, a scriptwriter, and a stage director.

Rather than in the analysis of its founding elements, the real worth of Paths of Glory should be appreciated in the feelings it evokes during its actual projections before audiences. Only in this visual experience the balanced combination of the musical score, the director’s style, and the actors’ performance contributes to express the author’s view. That’s why I think it convenient to indicate here two famous sequences, from which the dualistic nature of the film emerges very clearly. The first portrays General Mireau’s visit to the trenches, shortly before the attack to “the Anthill”. Looking elegant in his uniform, Mireau is filmed with a dolly out shot. He proceeds martially and proudly in the trench walkway, on a drum roll rhythm, stopping from time to time beside the soldiers, and mechanically asking them the same question: «Ready to kill more Germans?». The second shows the French assault to “the Anthill”, with the uproar of the battle as the only sound. It’s a long tracking shot scene, in which the director, after following the mass of the soldiers crawling forward between barbed wire entanglements and bomb holes, zooms in for a close-up of Dax. The colonel never ceases to urge his men to attack but, after seeing them all killed, looks quite uncertain and disheartened.

For its content, Paths of Glory was not shown in France until 1975, and was distributed in the United States only thanks to Kirk Douglas’s presence. However, it’s hard to define as a real anti-war film. Actually, it never questions war in itself, but depicts it as a fact, and represents its rituals. Its romantic closing sequence just portrays a short pause of quiet between a battle and another one. Even Dax never refuses to go out in action, nor General Mireau’s ruin really leads to a change. Man’s Evil, Kubrick seems to suggest, doesn’t lie in war, but in Man Himself.

In other words, Paths of Glory cannot be considered a pacifist text, but only one of the chapters of Kubrick’s meditation on history. A meditation linking the past, the present, and the future in the same pessimism. In contrast to Roberto Rossellini’s humanism, Kubrick’s view is sharply anti-humanistic. It refuses every progress and all positive dialectics, it is dominated by death and violence and is entirely lacking of the least hope of redemption.

Tucker: The Man and His Dream