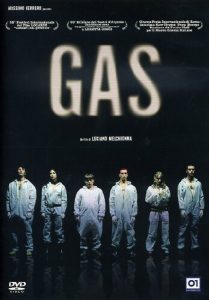 A gang of young people who go around on a bright red Mercedes kidnap a man coming out from a sex shop and take him to the basement of an old abandoned factory, where Luca, one of them, lives. A long night made of sex and violence starts, where the tortures to which the victim is subjected to overlap with the characters’ memory flash backs; we find out that each of the young people involved has a troubled life- one lives with his grandmother and works at the morgue, the other has a little child whom he has just abandoned on a corner of a street together with his wife and sister-in-law, another is supported by one of his father’s friends and constantly quarrels with his neighbour; and finally, there is Luca, a real deus ex machina, who has a story of extreme family violence and a repressed sentimental tenderness, but, moreover, unlike the others, he has his reasons. This terrible secret of his will be the cause of the story’s tragic ending.

Luciano Melchionna, a highly regarded author and Roman theatre actor, begins his career behind the camera by adapting his theatre comedy with the same name to the screen, with Alessandra la Capria’s help. Very little remains of the original theatre pièce but the characters, the setting and some sentences; all that is in excess classifies this film as one of the most interesting works of Italian cinema of the 90’s, even if, unfortunately, it was boycotted by the usual short-sighted distribution.

Melchionna starts from the genesis of violence and reflects on how some young people with very different social origins can gather having destruction as the unique common denominator. His analysis, like Kubrick’s approach from which his thesis comes (the tendency of quoting sentences from “A Clockwork Orange”, though being consistent with the character that uses them, are maybe the only notes out of place in the film) is bright and ruthless and has the quality of being neither moralist nor comforting; it is true in fact that family situations, together with their hypocrisy and hidden lies, are at the root of aggressive behaviour (in this sense the film includes a wonderful ‘slice of life’ which refers to the gang’s boss, son of a famous TV actor). It is also true that there is a good deal of free will that has nothing to do with and cannot be justified by the past, which nevertheless influences aggressive behaviour. In this way, Luca, searching for another truth, stubbornly fighting a reality that he does not accept but that he wants to be part of his life through the strength of his feelings, stands as an emblematic character with the strength of a moral warning. Therefore, thanks to an incipit that immediately leads us into medias res and to an irregular editing that makes us discover little by little each character’s story, the film succeeds in avoiding to become a dull description of suburban youthful hardship and becomes a touching parable on the need and the possibility of choosing a normal life.

Despite the wonderful virtuosities, such as the camera smartly turning around the actors’ bodies and the movement that embraces them all in an unique shot; nothing of this could be true without the actors’ excellent contribution; they give light to their characters, who are difficult and anguished, with a disarming spontaneity. All things considered, this could have been conceivable, given the group of young theatre actors chosen by Melchionna, while the choice of Loretta Goggi (who gives an extraordinary performance of a tragically troubled mother) and of the Israeli top model Moran Atias (more than persuasive as a young exploited woman) was a gamble. However, the director won. The film is highly recommended, a must see.

The Profession of Arms