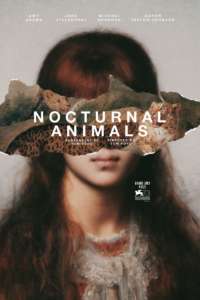 Susan (Amy Adams) is an unhappy gallery owner, imprisoned in the apparent perfection of an upper middle class life. When she returns home after yet another disappointing opening, she finds a parcel from her ex-husband, Edward (Jake Gyllenhaal), which contains the draft of a novel. The title is Nocturnal Animals, i.e. how he used to call her when they were married. The next day, Susan starts reading it before going to bed. From this moment on, the movie splits into three narrative levels, filtered through her divided mind: the present, in which she reads the novel, the past, which comes back powerful and vivid in her memory, and the book.

Based on Austin Wright’s novel Tony & Susan, Nocturnal Animals is a cruel thriller showing a reality without meaning, where even art and feelings are subject to a cold evaluation of loss and gains and where Susan is so alienated by the luxury around her that she cannot even manage to open a parcel without cutting her finger. The paradox which results from this situation is that horror, which is intangible in the real life, is embodied in the (even too much) concrete violence of fiction, which bears the same estrangement that makes Susan a victim of herself. Throughout the whole movie we do not see a kiss or a caress, and sensuality (which is present and it is a crucial element) is entirely expressed through the dialogues. The beauty of the body is shown in its imperfection, drown in violence and death but never in love.

Despite his short CV, Tom Ford (also the screenwriter) is very good at manipulating human nature. Hope, which despite everything we are constantly moved to glimpse, is the means through which every character is brought to self-destruction.
Walking around her gallery’s corridors Susan notices a work she had forgotten: a white script on a black background, REVENGE. There must be an end to one’s actions, it does not matter whether it is a noble one or not. Therefore, a murder without a reason is an absolute aberration; and revenge as an end becomes justice, vital instinct, fight for survival.
Edward’s novel embodies the climax of disenchantment and shares the message of apocalyptic dystopias: law has a value only as long as life has a value.

A complex movie, where human psyche is at the core of a plot constantly moving between noir and drama, with unexpected western movies’ influences. To be watched time and time again, in order to grasp all its sides.