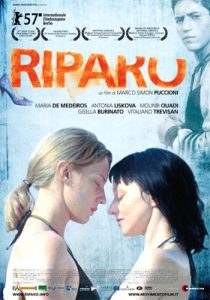 Anna, whose mother runs a large shoe factory near Udine, lives and is in a long term relationship with Mara, who works in the factory. Returning from a vacation in Tunisia, a young illegal immigrant, Anis, hides in their car and is discovered only when they arrive back in Italy. Anna decides to help him by letting him stay with them and finding him a job as a warehouseman in the shop run by her brother. This decision maddens Mara, who is struggling with a personal inferiority and inadequacy complex exacerbated by the degenerative disease of her father, who has always considered her a good-for-nothing. The fragile balance established between the three breaks down after Mara’s father’s death and Anna’s mother’s decision to sell the factory to Chinese investors, while nonetheless saving her daughter’s partner’s job.

It is easy to say that Italian cinema is in crisis; the reality is that when a precious gem like this film is produced, the distribution companies can only print a few copies for release in a limited number of  big cities, therefore making it practically invisible in most parts of the country. This was the case of the movie The Wind Blows Round [Il vento fa il suo giro], a forgotten award-winning masterpiece, which managed to hold out for almost two years at the Mexico cinema in Milan but remained unknown outside the city. It has also been the case of Shelter, which represented Italy at Berlin in February 2007, won major awards at the Annecy Festival, was presented at various festivals around the world and was released in our country with only enough copies to get a taste of it for a single weekend, before disappearing in the shadows of second-rate comedies and Hollywood blockbusters.

It is a pity, because Puccioni’s second full-length movie is a very delicate interplay of connections supported by a tight screenplay (written by the director  and Monica Rametta) and acting that borders on perfection of form and substance (a confirmation of the sublime Maria de Medeiros’ talent, a wonderful debut for the Slovak -born Italian Antonia Liskova, an outstanding faithfulness to the role for the very young Mounir Ouadi). It would be a crime to let it fall by the wayside.

While at first glance the themes of the film seem to be the difficulty of integration in a hostile world (Anis) and “different love” that clashes with perfidious respectability (Anna and Mara), the main theme is in fact deeper: the inadequacy and difficulty of relating to a world which is not simply devoid of values or scruples but, more prosaically, has different beliefs from our own and cannot accept this difference. A world where appearance matters a lot more than reality, where it is better not to rock the boat  and to maintain the status quo which is, after all, legitimate and reassuring It is easier  than trying to do something to improve our own situation and that of those who love us and risking derision, disapproval and misery. A world where the desperate search for shelter becomes an existential challenge, often destined to end in failure  and yet is the only desperate way towards self-acceptance.
In this world, anyone with an ounce of sensitivity lives in perpetual emotional turmoil where feelings resurface during moments of apparent calm (it is no coincidence that many of the scenes take place at night, in the enforced solitude of their beds, when they cannot sleep). This turmoil causes pain to be inflicted on others or, more often than not, on oneself and in any case leaves nothing as it was before.

The subtext of the film, plays with the symbols of affluent, provincial northeastern Italy and paints a picture of hypocrisy (Anna’s mother), condescension (Anna’s brother, whether aware of it or not), deviousness (Anis’ colleague, the warehouseman) and contempt (Mara’s father). It takes us back to a more shared and universal reality made up of exclusions and misunderstandings between individuals who do not want  to conform to society. This picture applies even to the socially marginalized, like Anna: in her relationship with Mara, Anna cannot transform herself from a rich and apprehensive parent into a solid and strong-willed companion, Mara cannot shake off her original sin of being an unsuccessful woman, and Anis shows the same vulnerability when he is unable to understand the relationship between the two women, becoming in this way responsible for the main turning point in the drama.

Three united solitudes can only lead to temporary  bliss, which is however fatally destined to cause disruption. Puccioni does not show us the new state of equilibrium, preferring to close the film with a suspended finale, and this is a good decision, since the doors closing on the main characters, like the stalks of wheat closing behind Anis as he desperately runs through the wheat field, may open again, bringing new life to the dreams of the neglected. And we will still be here, cheering  them on.
A little masterpiece, exciting and sincere. Very much recommended.