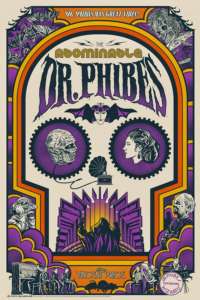 The main character is Dr. Phibes, a car crash survivor whose wife tragically dies in the same terrible accident. Still alive although disfigured, he decides to cover his face with a mask and only speak through an amplifier. Moreover, in order to take revenge of the surgeons who according to him could have saved his wife, the man decides to become a serial killer taking inspiration from the Plagues of Egypt. In this new adventure he is helped by his beautiful mistress Vulnavia.

Despite the not very successful sequel “Dr. Phibes rises again”, this extraordinary movie is a masterpiece of its genre combining grotesque and grand-guignol[1].  Fuest’s movie is a mix of phantasmagorical set scenes and situations which can be related to Woolrich’s “The lady in black”, whose film transposition made by Truffaut is still unforgettable. Very theatrical and extremely claustrophobic, the work has its strength in the setting and in Vincent Price’s over the top acting. In fact, the actor gives to his character an evil charm seen through a twisted lens: Dr. Phibes is not funny but despite his cruelty he is able to make us feel empathetic, not because of his motivations but thanks to his way of presenting himself. The man’s monologues are audible through a record player are an example of the spirit of this unique movie. The scenes are often morbid but always depicted in an unrealistic way that make them ambiguously funny; this effect is possible because of the kitsch scenography and the out of line scenery. The visual language is on the edge between the allure of old school cinema and pop art; similarities on this side can be seen in movies such as “Modesty this Blaise” or “Satanik”. Anyway, in spite of the resemblance, “The abominable Dr. Phibes” can reach a higher level which can be noticed in a better care of details. The last scene before the finale is considered a little work of art full of suspense and sadism, especially when Dr. Phibes forces one of his victims to witness his child’s execution.
It is definitely a movie not to be missed.

[1] “Le Theatre de Grand-Guignol” was a theatre in the Pigallle area of Paris, which from its opening in 1897 to it closing in 1962, was specialised in naturalistic horror shows.