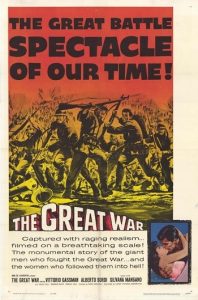 The First World War, a historic turning-point, is a source of individual and collective stories and, at the same time, an emblem of powerful and terrible images. Its themes are in fact rather relevant, as many forms of art have been prompted to reflect upon it, cinematography in particular. Besides the great number of genre films and of novel adaptations, quite a few outstanding directors portrayed the conflict in original productions, each according to their personal style. To mention just a few: Charlie Chaplin’s Shoulder Arms (1918), where comedy combines with dramatic features; Jean Renoir’s La Grande Illusion (1937), depicting the clash between the dying aristocracy and the rising working class; Stanley Kubrick’s Paths of Glory (1957), a brutally honest reflection on the supremacy and the deception of power; Peter Weir’s Gallipoli (1981), a moving homage to the young ANZAC soldiers fallen on the Bosporus front.

In its own way, Italian cinema also narrated the war. The best films were made from the 50’s onward, after the fall of Fascism and the changes in the socio-cultural situation of the country. At this time the authors could begin to work free from the emphatic influence of the patriotic rhetoric that had always hindered a balanced approach to some events, such as the Caporetto retreat.
The first, and definitely the best, among the Italian films on this subject is Mario Monicelli’s The Great War (La grande guerra) (1959), adapted from the short story Two Friends (Deux Amis) by Guy De Maupassant, set during the Franco-Prussian war in 1870, and also based on some passages of Emilio Lussu’s A Year on the High Plateau (Un anno sull’altipiano). The film recounts the tragicomic adventures of two Italian soldiers, Giovanni Busacca, from Milan (Vittorio Gassman) and Oreste Jacovacci, from Rome (Alberto Sordi). After a vane effort to avoid their duty hiding in the rear, the two young men, natural layabouts without a reason to be brave, are sent to the frontline. Although they try to avoid any danger, ultimately they are captured by the enemy and have the nerve to die like two ignored heroes, even though Jacovacci’s last words are: ‘I don’t want to die… I’m a coward!’
What I still find a surprise today is the director’s style in the making of this film. Monicelli, although convinced of the absurdity and uselessness of war, almost avoids to make a firm stand against it, except for a few scenes (the hospital train, the execution of the Austrian spy, the refugees leaving the destroyed village). On the contrary, he lets the images, in their perfect combination of drama and irony, express his thoughts. He just chooses to follow his two fearful and lazy protagonists closely, in their progressive steps toward death: the trench life, the relationships with their comrades and officers, the visits to the prostitute Costantina (Silvana Mangano), and their last moments of life before the haughty Austrian captain.
Upon release, some critics confused the lightness of style and plot of this film – both focussed on the ordinary soldiers, drawn to combat without a real cause – with both a lack of commitment and respect towards those who fell in the war. Actually, the director and his excellent scriptwriting team adopted the expressive canons of a typically Italian film genre. Later, this genre will be defined as the Italian Comedy (Commedia all’italiana), and Monicelli will be renowned as one of its founders and best masters.
The Italian Comedy film-makers, keeping a watchful eye on the works of the great Neorealist directors of the 40’s and the 50’s, combined the traditional adherence to reality of their precursors to a lighter, more pragmatic, and occasionally wry shooting style. In its best examples, the Italian Comedy reflects, sometimes with sarcasm or bitterness, upon Italian society, emphasizing its faults, its wrongs, and its horrors. Faithful to these principles, in The Great War Monicelli carefully uses humour, irony and, at times, the straightest and funniest comicality, and succeeds in portraying a substantially tragic and sad historical event in a smooth, captivating, and truthful way.
The Great War (awarded the Golden Lion at the 1959 Venice Film Festival) is shot in gorgeous b/w photography and is excellent in terms of its historical setting. In spite of the presence of two prominent actors, it’s an ensemble film, with plenty of small and big characters, some depicted with deep emotional involvement (like Lt. Gallina, played by Romolo Valli), some others just roughly sketched. In reality, this oversimplified descriptive manner, peculiar to the Italian Comedy canon, from a distance can be considered one of the faults of this film, which sometimes one would like to be less funny, more focussed and committed to its general theme.
As far as the two film stars are concerned, a special mention goes to Alberto Sordi. In fact, while Vittorio Gassman’s overplayed soldier Busacca is a bit mechanical and grotesque, Sordi admirably portrays soldier Jacovacci. Particularly in the final section of the film, when the two friends’ tragedy is getting closer, Sordi (awarded the 1960 Silver Ribbon by the Italian film critics) gives up his usual Roman mannerisms almost completely, lowers his tones and spirits and, stealing the scene from his colleague, renders his character’s speechless and visceral fear perfectly. Sordi will be able to repeat such a brilliant acting performance only in another film, which was shot almost twenty years later : this will happen once again in a Mario Monicelli’s production, An Average Little Man (Un borghese piccolo piccolo) (1977).
Apart from anything else, this fact can be considered further evidence of the Tuscan director’s mastery.