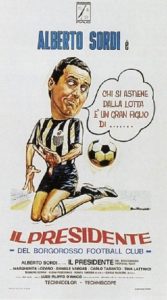 When the Vatican employee Benito Fornaciari (Alberto Sordi) goes to Borgorosso to bid his final farewell to his dying father, he finds the village completely desert. Only a few people remain beside Mr. Libero, hot-blooded and beloved president of the local football team, on his deathbed in the huge Fornaciari Valli’s house, listening to a football commentary on the radio. At the same time, in fact, everybody is at the stadium supporting the black and whites of Borgorosso Football Club, playing a vital match for promotion to the D-league.

On his father death, Benito inherits Borgorosso F.C. but, driven by his mother’s insistence, he plans to immediately dispose of that expensive toy. When the news that the new president has sold the team’s best players spreads in the village, the inhabitants rise up in a real popular revolution. There’s no heart that beats for any team other than Borgorosso Football Club in the tiny village in Emilia1: from the major to the factory workers, from the bar goers to the village priest. Dressed as a woman and forced to barricade himself in a room, listening to his father’s otherworldly voice speaking to him from a portrait, Benito improvises a speech (mimicking Mussolini) whereby he calms the fans down and promises glorious victories for the team.
Almost by accident, the clumsy officer is catapulted from the boring corridors of the Holy See to the presidency of Borgorosso, where everything is reduced to disinterested and bombastic passion. And between cheating coaches, overweight footballers, secret training camps and propitiatory rites with the gypsies, Benito will be expected to learn (thanks to daring attempts and not with a rigorous method) the craftiness of his new profession.

The comedy deals with the ineptitude theme, which is very close to the twentieth century’s sentitivity. When he’s called to take the lead of Borgorosso, Benito lacks all the qualities
which had  made his father a real institution in the village. Since from the very first sequences, the new president reveals himself to be mummy’s boy, stingy, gullible, ingenuous and, even worse, devoid of the minimum passion for football. However, right in the most tragic in the film (the siege of the fans to the villa), a miraculous conversion takes place: Benito finally abandons his mother’s profit calculations and he embraces the romantic and dreamy philosophy of his father, with whom he reconciles (almost ideally) after thirty years of silence. His presidential activity turns into a triumph of vitality, amid goodies of Emilian cuisine, nights spent with players’ wives and the madness of the transfer market, thanks to which Benito discovers a world of affections and little pleasure were unknown in his previous life. The Borgorosso Football Club represents for him the return to an authentic and genuine existence, where adulthood preoccupations give way to youth’s dreams, and where Benito, for the first time, will find a true family.

The movie flows nicely, driven by funny episodes and exuberant catchphrases (such as the black and white’s chanting: who refrains from fighting, is a…) and enriched by a series of laughable and amusing characters, above all coach Josè Bonservizi, alleged tactical genius called from Peru, which turns out to be nothing more than a faker with a strong Neapolitan accent. Alberto Sordi’s performance (directed again by Luigi Filippo D’Amico after Bravissimo, Complexes and Our Husbands) has to be highlighted: not only does the Roman actor contribute to the script together with Sergio Amidei and Adriano Zecca (a former footballer), but he also remains the film’s centre of gravity and he gives birth to an unforgettable character in Italian comedy’s tradition.
The whole film is embellished by a tender and emotional end in which the rivalries between the different factions of Borgorosso surrender in the face of Benito’s generosity : as the last act of love for the team and its supporters, he announces the purchase of the ex-Juventus champion Omar Sivori. And on the notes of a song which soon became a hit, the whole village is united in a carousel of horns and  black and white flags, yelling that football is always the most beautiful game, with a touch of healthy madness which characterizes the fans (and the president) of Borgorosso Football Club.

1Emilia is one of the two historical parts of the Emilia-Romagna region in Northern Italy.