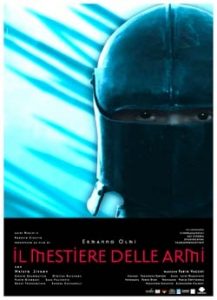 The great Italian condottiero has passed away. Destroyed by a cannon shot, which has crushed his leg, a devastating gangrene has killed him in the end. He leaves behind a trail of sorrow in those who loved him, of deferential respect in those who confronted him and, finally, of dismayed silence in those who, hastening his death with their apathy, have started a new era. A time when, to win a battle, one will no longer need to be brave in front of the enemy, but only to have the killing fire of the new arms – more and more powerful and destructive – by his side.

This is the opening sequence of The Profession of Arms, a film in which director Ermanno Olmi narrates the last days in the life of Giovanni dalle Bande Nere (Giovanni of the Black Bands), who died in 1526, aged only 26, after a skirmish gunfight with a group of Landsknechte, while he was trying to block their way to Rome. The movie chronicles the week before Giovanni’s death, a week he spent among night chases, ambushes on the banks of an icy-cold river, memories of a past left behind, and loneliness, made even gloomier by the dilatory tactics of the Bavarian captain. The death of Giovanni de’ Medici, a young nobleman who has chosen to live in battle rather than among the pleasures of the court, gives Olmi an opportunity to deal with his favourite themes – the waning of tradition, the solitude of the hero, the unattainability of earthly happiness  – which he mixes together in a play of light and shadow. So, young Giovanni is neither a spotless nor a bold hero, but just a confused man, facing an enemy who is more metaphoric than real. So, the inept Duke of Mantua, prone to his monarchic duties, gets lost before that wounded man who’s asking for friendship, and stares at him silently, unable to understand the mystery of death. So, finally, even the elderly German captain, who covertly buys his new cannons from the House of Este, is a victim of destiny as, so old and ill, he will not taste the joy of taking part in the Sack of Rome.

With his usual purity of vision, and the accuracy, that has always been so peculiar to him, Olmi depicts a story about the ineluctability of Fate, a story which stands as one of the most brilliant achievements of modern Italian cinema. In this way he skilfully commits himself to the rebirth of the Italian movie art, which in turn has found again, after so many years, a real film-making master.