Home Reviews Making movies Tucker: The Man and His Dream 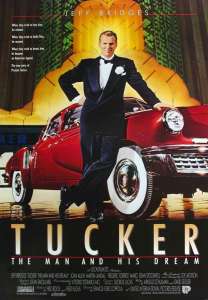 In 1945 Preston Tucker, a brilliant inventor, designs an innovative and futuristic car model, destined to outclass anything produced by car companies until that moment. Helped by friends and relatives, he succeeds in collecting the economic resources he needs to build his model. Everything seems perfect, but politics shatter his dream.

Tucker: The Man and his Dream is a homage to hope and dreams, in particular to the American dream according to which anyone with a great idea, will have the chance to fulfill it. It seems easy, but only up to a certain point, because competition and politics walk hand in hand. They try to interfere with even the smartest and the most authentic visions destroying both the hope and the meaning of the big dream

During the movie, the spectator participates in the adventures and misadventures of a peculiar Preston Tucker with the same emotional involvement that, years ago, only Frank Capra was able to create. The difference here is that in Coppola’s movie, the pictures are a little more superficial (the director, in fact, does not sign the script, written by Arnold Schulmann and David Seidler) because he is more interested in the theme rather than the characters. By involving the spectator in the dream, Coppola wants to emphasize the breakdown and the obstacles that both the government and the economy interpose between the idea and its realization.

There is an evident autobiographical allusion in this movie concerning the same Coppola: the construction of the futuristic Zoetrope studios, which brought the director to the edge of bankruptcy. The presence of George Lucas in the production may represent, then, the accomplishment of the dream: both the Industrial Light and Magic and the Star Wars saga, actually, were dreams come true. Moreover, as Roberto Escobar said: “Preston’s smile is so tenderly tenacious that it looks similar to regret. Regret for a past dream; one we’d like to continue dreaming about again and again”. Despite that, it remains just a visionary illusion: reality is quite different.

Michelle Landau’s performance in the role of Tucker’s financial counselor was magnificent in the same way that Jeff Bridges, a main character who tends to scroll his own problem until it is too late, was flawless. Very incisive was Dean Stockwell’s interpretation of Howard Hughes, another huge, disastrous dreamer.

A movie which is worth seeing again and again, even if only to have an idea of what the American dream really is. A defective work, but nevertheless unforgettable.