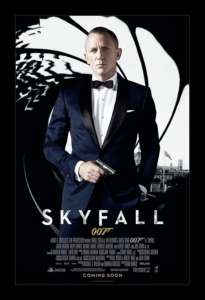 After an Istanbul mission gone from bad to worse, James Bond is given up for dead while MI6 is under attack by a mysterious enemy coming right from the Agency…

“007-SKYFALL” is the 23° official Bond movie and marks the 50 years of production of the series that nearly came to an abrupt end due to the bankruptcy of MGM but, thankfully, reprised in January 2011. This financial hole reduced a lot the exotic locations, so we have to make do with merely 30 minutes between Istanbul and Shanghai, while the rest of the film is set in London and Scotland, and Bond talks more than he shoots (shame Bond shame).

The latest Mission Impossible film had more sets and the Dubai sequence was pure entertainment. But what is this new Bond episode about?! A new villain, a prodigal blonde camp son of M, that freely talks of a world of spies kneeled down to global servers that control everything (yes spread is more dangerous than nukes now) and decide destinies of millions, while MI6 still uses dinosaurs like 007 to shoot and kill (where in reality a polonium sushi is more effective). We can imagine James Bond in a theatre with the modern (super) movie heroes to party at his latest adventure.

on the London weather and anecdotes on cold war still served cold with Martini. Then party’s over, a wino Bond talks to the guy mopping the floor, full of popcorn and soda, who tries to be nice to a grumpy old cold war veteran pissing on the red carpet. Sad to say that at this round only the blond villain, played by Javier Bardem and soul brother of the Anton Chigurh of “No Country For Old Men”, really wants to bed 007. Ian Fleming never imagined that for “God’s and Country” James “GOLDFINGERS” Bond maybe had to perform an “OCTOPUSSY” foot massage to “Dr.NO” because he’s really “THE SPY WHO LOVED ME”.

James Bond in theatres has come to an end. The character needs again a serious TV treatment (007 appeared first in the TV series CLIMAX in 1954 that adapted “Casino Royale”). On HBO or AMC writers can go deep in his mourning’s while killing baddies and bedding bimbos (there’s more sex and violence in “Game of Thrones” than in all three latest Bonds). Sam Mendes has done a good job, but he’s not an action director like Martin Campbell: “Casino Royale” gave Daniel Craig much to do and less to talk about. The Straw-dog-like ending is nice, while the Aston Martin sequence is more antique than vintage. We’re coming close to the Austin Powers saga, but without the MiniMe fun.

Javier Bardem is still under the mojo of Latin macho actors doing bi/gay freaks, like most of Bond villains, for the fun of UK/American audience. Bond Girls are now Bond Women and 007 is dancing solos. Let’s make a point: in this movie Bond feels and says he’s tired, he doesn’t go (nearly) anywhere and still has a PPK as a weapon in 2012. Next time call Guy Ritchie or Cristopher Nolan to direct, hire a top notch screenwriter, and watch “Casino Royale” at least ten times. If next I see Bond taking Viagra before having sex, I’ll ask for my money back!

Translation by the author