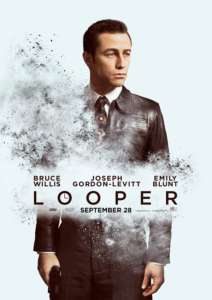 In the future time travel machines will be illegal, but will be used by the mob to send people to the past to be killed by gunmen called “Loopers”

From classic literature like Mark Twain’s “A Connecticut Yankee in King Arthur’s Court” to modern cinema like James Cameron’s Terminator, the “time travel” genre has always fascinated us.

“Looper”, written and directed by Rian Johnson (Brick), starts as an intriguing SF crime movie where the mob kills people in the Past to reign in the Future. Gordon-Levitt is a “Looper”, a gunman that “erases” victims from their future timelines: blindfolded and tied up, they pop up on a precise spot just to be shot down. But this perfect crime has a price to pay. Loopers, sooner or later, may end up killing themselves, and when Levitt recognizes his older self (played by Bruce Willis) in his next target, past and future have to team up to destroy the plans of the “yet to be” crime lord called “The Rainmaker”, now just a little boy, to save their past and future timelines.

Honestly, when in a movie characters clearly say that giving explanations is a waste of time, you know that you can ask for your money back. Here the “Indie Movie™” is an excuse for nonsense sold as “contemporary bold cinema” (glass for diamonds, we may say). Bruce Willis is a veteran of time travel movies (after “Twelve Monkeys” and Disney’s “The Kid”, way better than this) but the director uses him like in the “Die Hard” franchise: one-liners with lots of ammo spread on the walls. Lewitt has the romance, Willis the badass. Then the third act clearly shows that Akira, the anime by Katsushiro Otomo, can be made live (but in a better film we hope). To conclude, “Looper” is like a man cheating on his wife: the more he tries to explain, the less is believable. Out of the blue surprise endings may work for David Lynch, but not everyone is David Lynch.

Maybe we’re too harsh and “Looper” is just independent science fiction and not a Discovery Channel original movie. But when a director is too fascinated by what he writes and blatantly forgets to explain, this is not “a bold twist” but just clichéd Hollywood. For the next time travel movie I suggest a chat with James Cameron and maybe a blockbuster will come. Yes Ash please come back, Army of Darkness II is much needed!