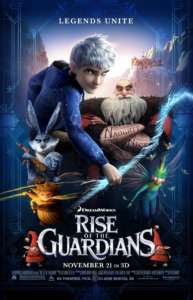 When Pitch threatens the happiness of children, the Immortal Guardians team up to fight him and protect the imagination of the children who still believe in them…

“Rise of the Guardians” is the latest Magnum Opus in the DreamWorks franchise, orphan of the Shrek bonanza, which grabs five characters of childhood memories and gives them the superhero treatment “à la Avengers” (the Joss Wheadon movie, not the comics…) with a pinch of Guillermo Del Toro (here as producer) imagination – the Easter Bunny world seems to be coming out of his “Pan’s Labyrinth”.

Taken from the children books “Guardians of the Childhood” by William Joyce, the movie creates a fantasy cape crusaders world where Nicholas St. North is a Cossack armed with double sabers and a space like sledge; the cool & hip Easter Bunny is a giant hare armed with boomerangs that can create rabbit space holes (voiced by Hugh “Wolverine” Jackman); Tooth Fairy is a mutant like “hummingirl” with a cute swarm of little helpers; and the last one is a tiny, mute, Buddha-like Sandman that can create everything with the power of his golden sand of dreams. When the hero group is threatened by Pitch, aka the Boogeyman, a Marilyn Manson lookalike with a Loki attitude that wants to erase the memory of the Guardians in the children’s minds, they have to ask for the help of a latest guardian chosen by the “Man in the Moon” (an important character of the books, sadly here only as “Deus ex Machina” – aka “the Ray of Justice”) that is -surprise- Jack Frost: a sad Emo kid with an heart of gold and the power of winter in his stick, dressed with a sweater, cape on, invisible to kids because no one believes in him.

Technically speaking this movie tops everything Dreamworks has ever done before. The director, master of storyboard, and the writer/artist of the books (fresh of Oscar nomination 2011 for “The Fantastic Flying Books of Mr. Morris Lessmore”) made together a work full of imagination and thrill rides (at least in 3D, boring in 2D). But, in the end, the movie is sadly short on substance, like the cotton candies sold in theatres. Nice to see so many beautiful landscapes, but the characters are a little empty (only Frost and Black have a background). The missing “Man in the Moon” is yet, still missing. Hoping for a sequel maybe called “Guardians Unite”. Heroes are always welcome. Even on Christmas Day.

Full of action scenes and super hero sets, maybe too adult for little ones, part animation part videogame. It has many kids in the story, the Guardians live thanks to children’s imagination, but there’s no chemistry between them. When a little one gets lost in the bunny world, it’s nearly impossible not to remember Pixar’s “Monsters Inc.”. And the biggest mistake is an evil Pitch that in the end is like Jack Frost: he only wants to be noticed and loved (thus you feel sorry for him, yeah here’s a napkin for Mr. Boogeyman).

Interesting that in a turning point Easter Bunny tells us why it’s so important to believe in him: because his holiday represents the rebirth of nature – Springtime. While Nicholas St. North is still the best UPS guy around, Tooth Fairy a (bloody) teeth addict, Sandy is useful only to Pitch at the end (but not to the screen time) and Jack Frost tells kids that they ought to love him because in Winter schools gets closed! But winter also gets cars into canyons, maybe the ones of people going to theatres to see this movie….
Yes! Go read the books! http://www.theguardiansofchildhoodbooks.com/index.php

Translation by the author