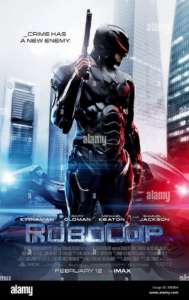 When Detroit becomes the experiment for a new military technology, only a man inside a machine could stand for the future of the law.

“Alive Or Dead, you’re coming with me!”. In 1987 a young European filmmaker, Paul Verhoeven, was called by Orion to shoot a new science fiction movie named ‘Robocop’ that had to act as a new springboard for Arnie. However, it appears that the production company was not completely aware of what kind of movies the Dutch director was famous for and what kind of fiction he had in mind.

Arnie was subsequently dropped for being too big for the main character’s costume and a fairly unknown actor named Peter Weller took his place. Even though he’s on screen for a one third of the movie, in time to be ridden to pieces to become Robocop, he will always be remembered for this little gem. What made the original so famous was an on screen violence that didn’t care about viewer discretion (with disturbing sadistic turns, even for today’s standards), a lot of black humor and a comic book science fiction drive ‘Judge Dredd-like style’) that places this movie on a level of his own (like “Starship Troopers” and “Total Recall”, Verhoeven’ science fiction best). The 1987’s movie was a big hit and even though its critics were divided and viewers were worried about the gore and violence, Robocop had two sequels (only the second movie had Weller in it) which were less interesting than the original, a TV show, two animated series, comic books and a video game till people got bored of the exploitation of the character who finally gets into the ‘Hollywood’s recycle bin’. Then in 2010 MGM and Sony decided to give Robocop’s franchise new life but with many rewrites and actors coming and going, troubles and tribulations were the routine until finally, in 2012, the Brazilian director José Padilha (famous for ‘Tropa De Elite’) and the Swedish American actor Joel Kinnaman (known for the TV show ‘The Killing’) were officially chosen. Even though the director was a little too fold under the tight ‘production wings’ the movie came to theatres in 2014. With a PG rating that soon gives the idea of what might be missing in the remake. Is Robocop 2014 still up to date in a world that has changed so much in nearly thirty years? Is Alex Murphy a man vs machine vigilante or a canned tin machine cop? Maybe Robocop 2014 just ends an era: the 80’s movies nostalgia.

While the Gremlins are still missing but not forgotten, the 80’s reboots are coming to an end even if original actors, like Harrison Ford for the new rumored ‘Blade Runner’, reprise their old roles. Robocop is no exception. There are more pieces of ‘man inside the machine’ with a cool bike to fight for justice while undertaking his own revenge path. However, even with the addition of nice CGI effects that make Robocop run like Bolt and move like a Japanese super hero, at the end of the day he’s just a mass product from a Chinese tech farm. He’s good as a comics’ icon but not as a new movie icon. Leaving all the other actors behind, trying to be neutral with violence and satire, giving more than necessary family backdrop like in an old Disney movie, the poor Robocop is ready to go to the retirement home for movie heroes. A nice TV show with more character issues and less production worries is better than making such a stale franchise.