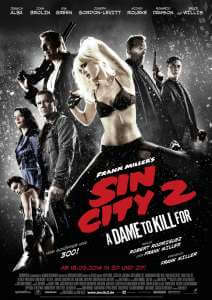 After nine years, Basin City, alias Sin City, is still a crossroads for madmen, killers, pimps and dark, very dark ladies. May Revenge be with You.

When you buy a new comic, usually the first issue is for the nice art, the second for the good story, the third means it’s true love. Like in the ‘Sin City’ graphic novels where ‘American Comic Master’ Frank Miller, winner of the Harvey and Eisner Awards, puts all his love of noir, dark ladies and madmen – in the vein of Chandler, Hammet or Spillane – using the Cinderella of the American comic-book art form: black and white graphics where, in a stroke of genius, strokes of light underline details, drama, and emotions. True Comic-book (He)Art form, one panel at time.

It was a natural step for ‘Sin City’ to come to movie theatres in 2005, thanks to Robert Rodriguez’s ‘love & respect’ for comics as a medium. With digital backdrops and actors that seemed to be lifted off the page, and using the black and white of the books, he made a blockbuster which was at once both modern and solidly set in his neo-noir roots. Frank Miller and the box office were largely satisfied.
The following year Miller had another of his comic-book jewels transposed: ‘300’ by Zack Snyder, and in 2008 he directed his own version of ‘The Spirit,’ taken from the eponymous masterpiece by his longtime friend and founding father of the American comic as it is known today, Will Eisner.
In 2009 ‘Sin City 2’ was announced at comic-book festivals, but despite rumor after rumor, nothing came out.
Then in August 2014 the sequel called ‘A Dame to Kill For’, from the graphic novel of the same title, came to screens with an A-list cast and a copycat formula of the 2005 movie.
A slice of sweet comic-book pie, deep fried in cinematic style but, after nine years, suffering from being reheated too much in the pre-production microwave. A revenge movie is best served cold – but not frozen!
What made ‘Sin City’ a ‘BAM!’ in 2005, made it a ‘BOMB’ in 2014. The first Cine-Comic victim, a sad loss for the genre. But what made a movie so full of sex, comic book violence, sadism and femme fatales such a miss more than a hit? Here’s what…

Follow-ups in comics and movies are always welcome if some simple rules are respected: freshen up old characters, never be tired of tired formulas, give viewers what they want and fill the final round with two or more surprises. Shake and serve, the sooner after the original the better.
Movies labelled ‘sequel/prequel/whatever’ by the guys who made a blockbuster nearly ten years ago seem risky if the budget is too high, even riskier when the old stories seem more interesting and inspired than the new ones. HBO, Netflix, and Starz are better places for the ‘Sin City’ comic book saga to cover more material than can be used in just ‘A Dame to Kill For’. And there’s a lot of good stuff to chew on.
The true Sin (City) is wasting the opportunity of a long-awaited second date, and before the third becomes the last, they should consider the opportunity of TV/cable.
Better to shine on HBO than be eclipsed at the MULTIPLEX.

Translation by the author (edit by Roma O’Flaherty)