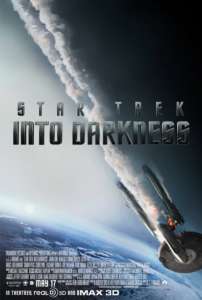 After a terrorist attack, the Enterprise and its crew face a new powerful enemy called Khan on a mission to destroy them for once and for all.

Paramount in 2009 presented in theatres the reboot of the “Star Trek” franchise by famous TV author (“Alias”, “Lost”, “Fringe”) JJ Abrams and his talented crew of writers along the “Bad Robot” production company (“Cloverfield”). Also with a new team of young and talented actors that had the mission to recreate the magic of a show with a forty years history while refreshing the ideas of the Gene Roddenberry’s saga. The movie became a huge hit and the sequel was easily green lighted.

After many writings, “Into Darkness” came out presenting again ideas of a science fiction respectful to the past but projected into the future “To boldly go where no man has gone before”, like the motto of the series. A feeling of a living Universe where nerd-science terms are used up to a minimum, drama, comedy and action made with likable characters. Finally scenes in open worlds and not just in narrow spaceship corridors. City landscapes without using the “Blade Runner” cliché like in the new “Total Recall”, but trying to build up a believable “Megalopolis of the Future”. Yes at this turn Spock seems to get the “Wolverine” treatment and the cast, even Captain Kirk, lives a bit in the shadow of the Vulcan. But we can forgive the writers: pointy ears are so sexy!

A slightly remake of 1982’s movie “The Wrath of Khan” (but the “bug in the ear” scene was yet done in 2009) with the famous Spock “death scene” inverted, “Into Darkness” makes itself proud of good science fiction drama, alien words and a believable London of 2259. Also comedy moments like when the Enterprise engines start to work again thanks to a “good old kick” like a Citroen 2CV or a long intergalactic call received in an alien disco with music at full. With the new entry Benedict Cumberbatch, star of the BBC’s show “Sherlock”, called to play the negative warrior Khan, made in the original by the late Ricardo Montalban, the film has not one but two evil foes: Peter Weller aka “Robocop” who we’d like to see more at the movies. The ending with a berserk Spock against the fugitive Khan is maybe too much for Trekkies, but all the others can enjoy.
Just two things now gets boring: the overuse of lens flare effects to get a “space feeling” like in a Daft Punk video and too many close ups in scenes where maybe a long shot is needed. It’s official that JJ Abrams is at the helm of the new “Disney’s Star Wars” franchise (maybe will be called Star “Trek” Wars). Lightsabers will glitter like Disco Balls, John Travolta gets the action scenes and the Bee Gees will do the soundtrack: this new “Saturday Night Space Disco Fever” is a sure winner!

Translation by the Author (edited by Sabrina Macchi)