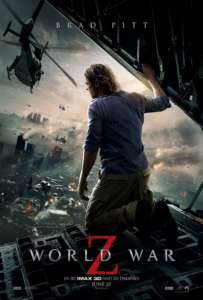 “World War Z” is a 2006 novel by Max Brooks that tells, in a journal form, the worldwide investigations of a journalist in search of stories about survivors of the “global war against the undead”. Full of dramatic and ironic scenes, the novel tells, almost like a documentary correspondence, spectacular moments of political and military actions together with daily survival scenes connected to the terrible pandemic consequences. The protagonists are human beings that looked inside the abyss, and the horror devoured them.
This idea was so interesting that Brad Pitt and his “Plan B” production company fought hard to win the rights over Leonardo DiCaprio and his “Appian Way”. After choosing the screenwriter J. Michael Straczynski (“Changeling”) and the director Marc Forster (“Quantum of Solace”), the filming was ready to begin in  2009, but it was postponed until 2011, and then again until 2013.

The beginning of the film is promising and Brad Pitt does his best to seem believable (he’s the only a-list star on the set, all the others nearly unknown actors are in the background, including our beloved Pierfrancesco Favino), but then it shows “video-game” special effects, a script that seems repeatedly re-written, and a preposterous ending, even for a horror movie (makes it feel like a third of the film is wasted).
No blood, no suspense, there are many scenes where it’s not clear who are the healthy people and who are the infected our heroes are running away from, and some moments where cartoon-like scenes are supposed to be dramatic. If the blond hero who saves the World throws a bomb, making the plane he’s also flying on precipitate, the plane explodes and all around there are death and destruction, yet he comes out of it unharmed and without a scratch, it’s not a horror. It’s science fiction.

When you see a movie that tries to please everyone, doesn’t scare, doesn’t shock, doesn’t bleed, and has more action than substance, it is not a movie but rather a “marketing pancake”.
You eat it, you think it tastes good, but it’s just a pancake. Luckily, the 190 million dollars family horror is a too risky investment. If you can’t do properly the graphic with cartoon-like characters that are supposed to look like credible actors, it’s like you’re re-watching that film based on a classic book, whose title is the only thing left in the film, where a dog acts better than the main actor. Maybe it’d be better to carefully read books before doing a film adaptation.
But beware, marketing people don’t read, they can only make pancakes.

Translation by the Author (edited by Sara Di Girolamo)