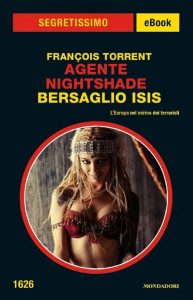 François Torrent’s (real name Andrea Carlo Cappi) novel could be defined prophetic, for it anticipates the ISIS attack to Paris in November 2015 (the book was first published in September 2015, two months before the real attack).
Mercy Contreras, alias Nightshade, has to tip the scales in the favour of CIA in a war between two rival groups from the Iranian intelligence, by intercepting a ship carrying chemical weapons destined to the Daesh. The Russian and Italian secret services, Pasdaran and some ruthless weapons smugglers are players in this game too.
Torrent creates a breathtaking adventure, showing a disturbing global scenario and expressing his concerns about the conflicts and related intrigues of our times, revealing their backgrounds. An accurate work unveiling many sides of ISIS we ignore, and a perfect mix of fiction and facts.
At the end of the book we find “Medina – Yo no soy marinero”, a nice short story signed by Andrea Carlo Cappi.