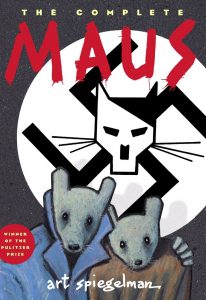 In this graphic novel by Art Spiegelman, the past and present of his father, Vladek, are intertwined. The son interviewing several times his elderly father represents a frame to the narrative. At the centre of his investigation is life in a Nazi-occupied Poland, and later, in the Auschwitz camp.
This work is not only a testimony of the Jewish extermination, but also tells, with a rare skill, the complex relationship between a father and a son.

Without any rhetoric, Spiegelman tells the parable of Vladek and Anja, a happy bourgeois couple overwhelmed by the horror of History, but also gives us the tragic portrait of an old man who survived, wrecked with many manias, living with the anxiety of not throwing anything away because even a piece of string may be valuable some day: this is what the camp has taught him. His experience in the camp has also made him develop a detached distrust of his own kind: If you close them together in a room without food for a week, then you see what friendship really means.  This is what his father had told him when he was a child and it functions as the novel’s opening line: perhaps is a clue. The author, actually, doesn’t tell us about heroic acts, but about the absolute banality of evil, which not only does it contaminate the perpetrators, but also the victims.

The drawings depict the tragedy with discretion and a sense of limit, never dwelling on gruesome details, and such simplicity is enhanced by the choice of concealing human features under zoomorphic masks. For Spiegelman, in fact, the Nazi abomination does not need an expressionist tract, it does not need to be flaunted : the sharp nose of a glassy-eyed rat is enough to remind us of all the horror.
An uncomfortable work, and because of this it has to be read very carefully.

Ennio Flaiano – A Time to Kill