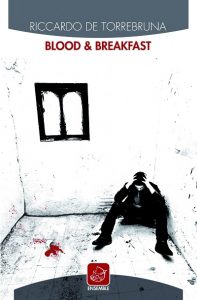 Carl inherits a house under a flyover from his hateful grandmother and decides to convert into a B&B. In order to start the business he is forced to turn to the despicable councillor Clemente Travaglio and, in the business launch, he decides to listen to the street trader Karem’s advices.
The business venture is destined to a total failure, just as Carl’s life: he is always hesitant and with an unresolved identity; this irresolution is also typical of his guests who are affected by personality crisis that is like a grey mirror reflecting our agitated and overplanned present daily life. Moreover, the guests who recall fragments of Carl’s past, disappear and leave behind them cars, luggage and Django, the dog that will become Carl’s faithful and mistreated friend.

Blood & breakfast is a captivating psychological noir that goes to the root cause to all evil, to its dullness and to its spreading. Its noble ancestors are novels such as Psycho by Robert Bloch and Crime and Punishment by Fedor Dostoevsky, though widely differing from them.
Riccardo di Torrebruna drafts the plot with consumate skill and paying attention to details. He catches our imagination with an unusual story and he surprises us with an ending far from being predictable. A book written with a scalpel that leaves a scar like a real experience.