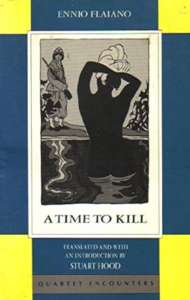 The misadventures of an Italian settler

Wandering in search of a doctor to nurse his toothache, an Italian lieutenant walks away from the battlefield and ends up lost and alone in the background of a surreal and atypical Africa. This is how his misadventures happen to begin. Firstly, he convinces himself of having contracted leprosy, then he escapes sure of being wanted for attempted murder and, finally, the man turns himself into a thief and a clumsy attacker.

“A time to kill” is the first winner of the Italian literary prize “Premio Strega” back in 1947. The book is not only a strong symbolic representation of the war, which is analyzed with ironic cruelty, but it also tells about a brutally realistic projection of what could have meant to be being an Italian settler in the Thirties. Contrary to the larger-than-life and kind portrayal of Italian soldiers as “good people” and opposite to Montanelli’s stereotypical Italian latin-lover, Ennio Flaiano now compares a silent majority. As a matter of fact, the author choses to focus on a middle class ready for anything in order to save its reputation. Similarly to Gregor Samsa’s astonishment in waking up a giant insect, the main character begins his story by saying:” I was amazed of being alive but tired of waiting for help”.