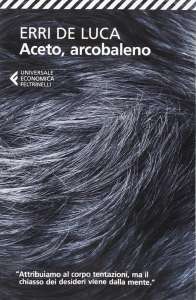 Sometimes a life contains many other lives. In this novel, De Luca uses four lives and a house to tell just one. The characters are: a murderer, whose existence is filled with death and anger; a missionary, who lives his vocation between temptations and the path toward his faith; a wanderer, who wants to preserve his dignity no matters what and an ill man, who lives through his friends’ emotions.

Existences which can’t be stopped until their path is ended: “there’re no inns in the sea”. Main characters are men who narrates themselves, at the end of the journey, in a house, that welcomes them and where walls, through their own stories, seems to taste all their disappointments and joys.

Different lives which, in the end, have docked after a long crossing.
In this novel Erri De Luca is fully present: he’s the poet who’s able to create, in just one sentence the emotions we all felt, and that we never able to highlight with a single and precise thought. He is the worker who well  knows how much live there is in muscles’ work, and in the solidarity between men hit by the same fatigues. He is the writer who tells lightly and with disillusionment the existence’s beautifulness and the ugliness. Finally, he’ s a traveler and a culture eager man to discover and to narrate.

“Vinaigrette and rainbow”, is the proof of how each life touches other lives, blending them without being corrupted that much. Like a seed, which is gathered somewhere, and it is spread in remote places, aware of that this is something, which has been done before and which will be done in the future.
A book which lift us up because each one of us, in our own solitude, inevitably, end up again reading himself.