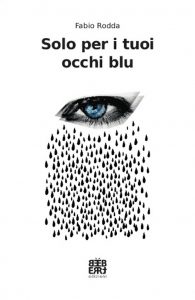 From the depth of two blue eyes

After his fictional debut with the novel Gli infiniti possibili (The possible infinities), Fabio Rodda explores five dark sides of love in as many short stories, each one of which has the title of a song*, all having in common blue-eyed protagonists.
The author was born in Pedavena but became Bolognese of adoption, scrapes feelings, showing all of their roughness and impossibility. From emotion to obsession, from attraction to passion, he explores various love facets with sensitivity and involvement, using rather a reflective than narrative style. He is never trivial, despite the fact that emotions often are, although we like to wrap them with illusory uniqueness. For love is always cruel and selfish. Even when it is seen from the depth of two blue eyes.
Two of the stories are particularly effective: The King is Dead, which stages the involuntary farce that is the Milanese yuppies’ life, and Used to Love Her, in which the author plunges into the deviate mind of a serial killer whose victims were all women.
A surprising mosaic, in which Rodda is capable to say something new about love.