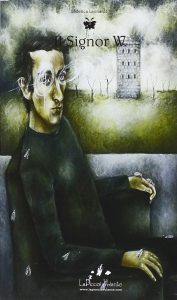 Federica Leonardi’s first novel is a long imaginary adventure, taking place in a fictional city where the ancient prevails over the modern. Haunted by a resident of the apartment building where he lives, Mr. W. has to do anything to hide his secret, related to his disappeared father as well as to the ancient cult of Tiktaal, which closely resembles Howard Phillips Lovecraft’s most famous creations. However, when he falls in love with Samia, a cashier in a family-owned grocery store of which he is a client, W. has to make a choice.
With a clear and safe style, solidly mastering her writing tools, Leonardi builds an original novel of considerable tension, which combines gothic horror and fantasy. Nevertheless, she displays a certain degree of superficiality in outlining the novel’s few characters and in the end she loses the narrative control, derailing into an endless apocalypse.
A book for its own sake, without praise or blame.