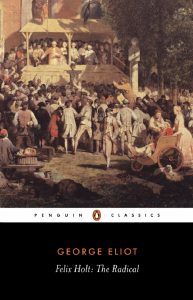 [Felix Holt, the Radical (1866) is a social novel written by George Eliot. In a small English town Harold Transome, at the time of the First Reform Act (1832), contests an election to preserve his politically stagnating lifestyle. Felix Holt, a sincere but opinionated Radical, contrasts his opportunism., Ed.]

I had rejoiced without reserve in Felix Holt the illusion of reading which, outstretched on my then too frequently inevitable bed at Swampscott during a couple of very hot days of the summer of 1866, comes back to me, followed by that in sooth of sitting up again, at no great ease, to indite with all promptness a review of the delightful thing, the place of appearance of which nothing could now induce me to name, shameless about the general fact as I may have been at the hour itself: over such a feast of fine rich natural tone did I feel myself earnestly bend. Quite unforgettable to me the art and truth with which the note of this tone was struck in the beautiful prologue and the bygone appearances, a hundred of the outward and visible signs of the author’s own young rural and midmost England, made to hold us by their harmony. The book was not, if I rightly remember, altogether genially greeted, but I was to hold fast to the charm I had thank fully suffered it, I had been conscious of absolutely needing it, to work.