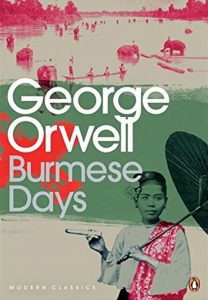 A man between two worlds

John Flory, an Anglo-Indian teak merchant, feels like he belongs to two separate worlds, India and the British Empire, and can’t decide between them. And yet, when he becomes the victim of a corrupted magistrate, his choice will come up naturally.
Based upon the author’s personal experience during his five years spent in Burma as an Indian Imperial Police officer, this novel encountered problems with publication, as publishers feared to be prosecuted for slander. The book portraits one of the worst side of the English domination, which particularly took place in the British Empire colonies. Despite the schematic description of some characters (Good and Evil are far too pronounced, with the first lying on the Burmese side and the second on the English rulers), this novel cleverly represents the moral crisis of a quickly waning Empire.