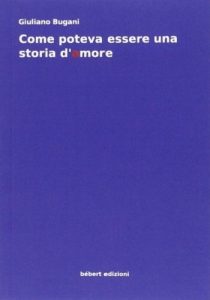 Included in the collection “The unresolved”, this book by Giuliano Bugani presents two long stories. The first, which provides the title of the little volume, is a story of lost love: a love  that, despite a will to find it again, as expressed in the epistolary correspondence between the two main characters, it is not certain that it will be found again; on the contrary the unexpected could transform this love into tragedy; but it changes, in their meeting, into a bigger love act, a more sincere and extraordinary act, characterized by self abnegation and noblility, even in the face of a mocking fate. The ending stuns us.
The second story, Donnarkica, is instead a conversation between the mothers of the Desaparecidos: missing sons, and a soldier who represents the point of view of power. This text, which has been deposited in the House of Memory in Santiago in Chile, is a slightly rhetorical memento mori that makes use of a dense alternation of  points of view, and whose great merit lies in the fact that it reminds us of things which should never happen again.
This is a book that can be read quickly, but that leaves a longstanding mark in the reader’s mind.