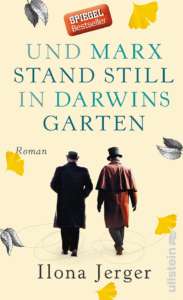 A novel that tells, with frequent flash-backs, the last years of two of the most important minds of the nineteenth century: Charles Darwin and Karl Marx. Using an interesting narrative artifice (an attending physician shared by the two scientists), the author brings together Darwin and Marx, who actually lived many years in London during the same period. Between History (Marx found revolutionary the book The evolution of the species, which somehow marked the end, or at least put into question for the first time the theory of Creation of the universe as it had been told up to that moment by religion. Darwin among the books in his library seemed to have a copy of The Capital, with a dedication from the author) and Fiction (the meeting does not seem to have ever happened, nor the physician existed), the doubts and contradictions of the two great intellectuals are told. Determinate and volitive, Marx the revolutionary, while Darwin was passionate and melancholic, and felt almost the guilt of having revealed to the world the tale of the man created by a mixture of mud and the woman generated by a rib of the man. An excellent book, which makes us travel through time and takes us to a smoky London in no way salubrious for the lungs of the two illustrious protagonists, but above all that allows us to come into contact, as if we were spectators at the events, with two characters that somehow changed the course of human history.